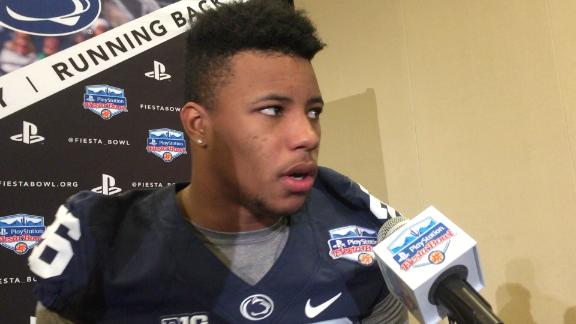 SCOTTSDALE, Ariz. -- Running backSaquon Barkleydoesn't know when he will make a final decision on his NFL future, but he is doing his best to put it out of his mind in the lead-up to Penn State's bowl game this weekend.

"Whenever it hits me," Barkley said Thursday morning at a news conference for the PlayStation Fiesta Bowl. "It could be the day after [the bowl game] I know I'm going to stay or going to leave. It could be the last day [to declare]."

Barkley said pushing the looming choice between a final year of college football and what many believe will be a spot in the first round of the NFL draft isn't always an easy task.

"It's hard because it's right in front of you," he said. "I'm human. I have taken time to think about it. I talked to [coach James] Franklin about it before the season even started. I talked to my family about it. The best way I try to deal with it is to live in the moment and appreciate the time I have here."

Barkley has run for 1,134 yards and accounted for 21 touchdowns this season for the Nittany Lions. He said he thinks his versatility will be a plus for him in the eyes of NFL coaches and scouts whenever he goes pro.

In the fall, Barkley told reporters that he couldn't imagine sitting out a bowl game. He said Thursday that even though he is looking forward to facing Washington and its vaunted rushing defense (4 p.m. ET Saturday), he has changed course on how he thinks about his peers and their choice to play or not in postseason games.

He said he appreciated the comments UCLA quarterback Josh Rosen made last week about understanding each individual player's situation before judging what he decides to do.

Being at full health made it an easy decision to play against Washington, Barkley said. He said the best advice he received from former Penn State players who have gone on to NFL careers is that at some point "you're going to want to come back to this moment." He said he feels lucky to be able to make the most of that time on the field but added that he understands other players, such as Florida State's Derwin James, opting out of a bowl game.