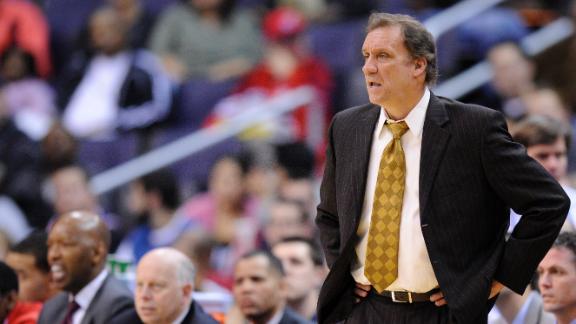 In an interview Wednesday morning with ESPN Radio's "Mike & Mike," Minnesota Timberwolves president of basketball operations Flip Saunders downplayed the idea that he might return to the Wolves' bench after this week's retirement of Rick Adelman.

"I don't really see that scenario," Saunders said, insisting that his duties running the Wolves' front office were too consuming to make a coaching comeback.

"I know it's been brought up a lot, and you never say never, but we have a lot of things going on here," Saunders continued. "I've got a lot on my plate, and that's enough right now to deal with."

Persuading any of those college basketball heavyweights to leave the comfort and security of their respective programs is regarded as a major challenge, to say the least, but NBA coaching sources told ESPN.com this week that the Wolves would indeed prefer to fill their opening with a top name from the college game if Saunders is staying put.

Sources also said that the Wolves are already highly pessimistic about their ability to lure Hoiberg -- who played for Saunders in Minnesota and later worked for the Wolves as an executive -- away from Iowa State after he recently received a contract extension.

ESPN.com's Jeff Goodman reported this week that Izzo, at age 59, is "intrigued" by the Wolves' job and working with his close friend Saunders after previously resisting well-chronicled overtures in the past from Cleveland Cavaliers owner Dan Gilbert.

Donovan's interest level is unclear at this point, but he is free to jump to the NBA now after completing a five-year ban in his deal in the wake of accepting a job to coach the Orlando Magic in 2007 after his second straight national title.

Donovan, who has a $500,000 NBA buyout in his current contract, wound up staying with the Gators after backing out of his deal with the Magic.

The Wolves are trying to find a coach who can help them persuade franchise power forward Kevin Love to commit to Minnesota for the long term. Love is eligible to become a free agent in July 2015 and, despite his prolific production, has yet to reach the playoffs in his six NBA seasons.

Love's future, looming contract extension talks with point guard Ricky Rubio and renovations to the Wolves' Target Center home -- as well as the construction of a practice facility -- are among items Saunders cited as keeping him busy.

He also expressed confidence that his extensive experience as a coach with Minnesota, Detroit and Washington enables the Wolves to take their time with a search because Saunders himself can oversee offseason training and development schedules for Wolves players while the hunt for a coach takes place.