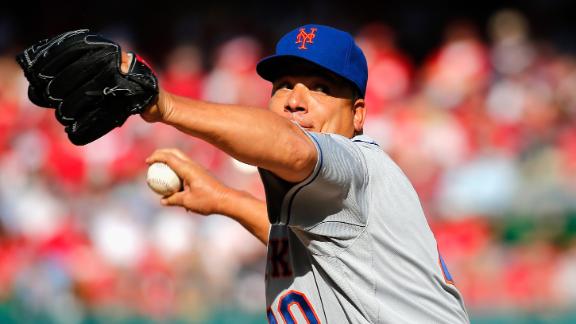 
And Max Scherzer probably was going to give up a hit one of these weeks.


And that perfect script to theWashington Nationals' perfect season was probably going to go amiss sooner or later.


But there's an excellent Opening Day lesson for those Nationals in their messy little 3-1 loss to theNew York Metson Monday. And it's one the 2011 Phillies, or the 1996-2003 Braves, could tell them all about.


To go where the Nationals are built to travel, it takes more than the world's most mega-hyped starting rotation.


There are plays that need to be made. They sure weren't made Monday.


So on days when $210-million starting pitchers take no-hitters into the sixth inning, give up zero earned runs and punch out eight, the great teams find ways to win those games.


Now we never want to be accused of taking one loss on Opening Day and drawing grandiose, over-dramatic conclusions. So this is where we quote the eloquent words of catcher Wilson Ramos, which sum up the true meaning of games like this fabulously:


Well, that would be true. They've got 161 more games coming. And the proper authorities will require that they play every darned one of them.


But it was still kind of shocking to watch how quickly, and how strangely, the Nationals found a way to mess up what could have been a beautiful Opening Day script.


One minute, they were riding the euphoric wave of a titanic Bryce Harper home run and 5 2/3 brilliant, dominating, no-hit innings by the new ace in town. The next, a routine pop-up didn't find its way into anybody's glove. And it was time to rip up that beautiful script, with the help of Bartolo Colon, Lucas Duda and the Mets.


With two outs in the sixth inning, Scherzer could still say he'd never allowed a hit as a National. He'd retired 17 in a row after a walk to Curtis Granderson leading off the game. The hardest-hit ball of the day off him had come off the bat of Colon of all people. There were two outs and nobody on. And Scherzer hadn't run a three-ball count in an hour and a half. It was quite a spectacle to behold.


Asked if he'd begun to think that maybe the man on the mound had no-hit stuff, Desmond laughed.


And for the record, Scherzer admitted he was feeling it, too. All of it. The day. The crowd. The setting. The moment. The heart pumping at about 3,000 beats a minute.


"It was fun," he said. "I had a lot of fun today. The atmosphere was great today. My adrenaline was flowing. Let's say that. And I was able to use that to go out there and attack the zone with it. So that's what I've learned over the years. When you have a high-adrenaline moment, use it. Don't try to shy away from it. Embrace it and use it to your advantage."


Out of nowhere, he walked Granderson. Again. On four pitches. But even though 42,295 stoked people in the seats immediately stirred uneasily, it shouldn't have mattered, because David Wright then lofted the next pitch into short right-center field. For what should have been the third out.


Back went the second baseman, Dan Uggla, camping under it, waving his right arm, calling for it, assuming it was his ball -- only to realize later, he said, that "I just wasn't loud enough."


Because here came Desmond, playing with Uggla for the first time ever in a regular-season game, to call him off. Which was fine, except that Desmond then forgot to catch the baseball. He stuck his glove out. The ball ticked off the leather and dropped onto the grass. And everyone was safe. Oops.


"It was just one of those things, man," Desmond said. "The ball was up there. It was up there for a long time. I wasn't really that confident that anybody else was going to call it. So I called it -- and dropped it."


Four pitches later, Lucas Duda -- whose .193 career average against the Nationals at that point just happened to be the lowest of any active player -- smoked a 98-mile-per-hour Scherzer heater, a pitch Scherzer later called "my best fastball of the day," into right-center for a two-run single.


An inning later, another Desmond error was followed immediately by a Travis d'Arnaud RBI triple. And so, even on a day when Scherzer would give up no earned runs, allow only four hits, throw first-pitch strikes to 22 hitters and show those Washingtonians exactly why this team emptied its checking account to sign him, here's what he got out of it:


A capital "L" next to his name in the box score.


All right, now here's how odd that was:


Over the previous 101 years, you know how many other starting pitchers had something like that happen to them on Opening Day -- work at least 7 2/3 innings, allow zero earned runs, give up no more than four hits and get a loss out of it?


Exactly one, according to baseball-reference.com's still-awesome play index. That was Ferguson Jenkins. In 1976.


And Max Scherzer had never had a start that turned out like that, in five seasons and 198 starts as a Tiger. But it happened to him Monday. In his first start as a National. Because, well, of course it did.


So naturally, we had to tell him about that afterward. And all Scherzer could say was the mandatory: "Hey, that's baseball." But he also said this was nobody's fault but his own.


Well, he didn't do that on this day, not when he had to at least. His teammates didn't make plays. His offense didn't get a single hit (in six trips) with runners on base. And that's what tough losses are made of.


Asked if he'd advise us all not to overreact to one tough day at the office, Scherzer chuckled: "Please. Don't. But I know you guys will."


OK, some people will. Most people won't. The season will go on. And six months from now, the best team in the NL East will spray champagne. We'd all be crazy to bet, after one ugly Opening Day, that it won't be the Nationals spraying that Domaine Chandon. But there's still a moral to stories like this.


Contrary to popular belief, the World Series is not won with aces. It's won by teams that play great baseball to make those aces look ace-like. But that's one thing the prohibitive Vegas favorites forgot to do on Opening Day.


Oh, it happens. But only 161 more chances remain now to get it right.