Scott: Kobe's reaction was mine, too 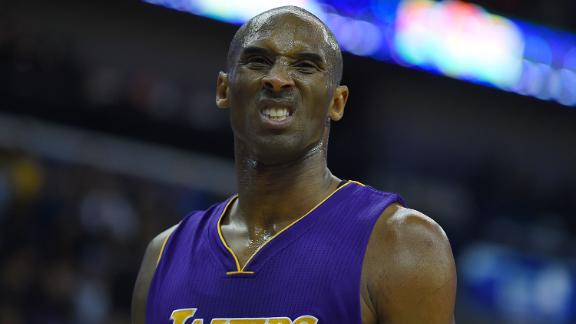 ESPN
By Baxter Holmes
EL SEGUNDO, Calif. -- Los Angeles Lakers coach Byron Scott said he was "angry" and "very disappointed" with how some of his players boisterously celebrated Sunday night after an overtime win against the rival Boston Celtics at Staples Center.

Scott said he wasn't aware how some Lakers -- largely guard Nick Young, forward Jordan Hill and forward Carlos Boozer -- acted on camera during on-court interviews after the win until he saw footage of it that aired Monday night on ABC's "Jimmy Kimmel Live!"

Kimmel played a clip of those players' reactions for injured star Lakers guard Kobe Bryant, who was a guest on the show, and afterward Bryant sat there stone-faced and silent.

Scott said he did the same when he saw the same footage.

"Kobe's reaction was pretty much my reaction when I was watching it," Scott said after practice Tuesday at the Lakers' facility. "I was just shaking my head like, 'I can't believe this.' "

Scott said he showed his players the footage Tuesday morning and "just told them that I was disappointed in it. That's not us as Lakers. That's not how we act. It showed a lack of professionalism."

Scott said he didn't discipline any players and believes the matter is resolved after addressing his players.

"As a coach of this team I was very disappointed," he said. "That's not how I act, win or losses. I want our guys to know that."