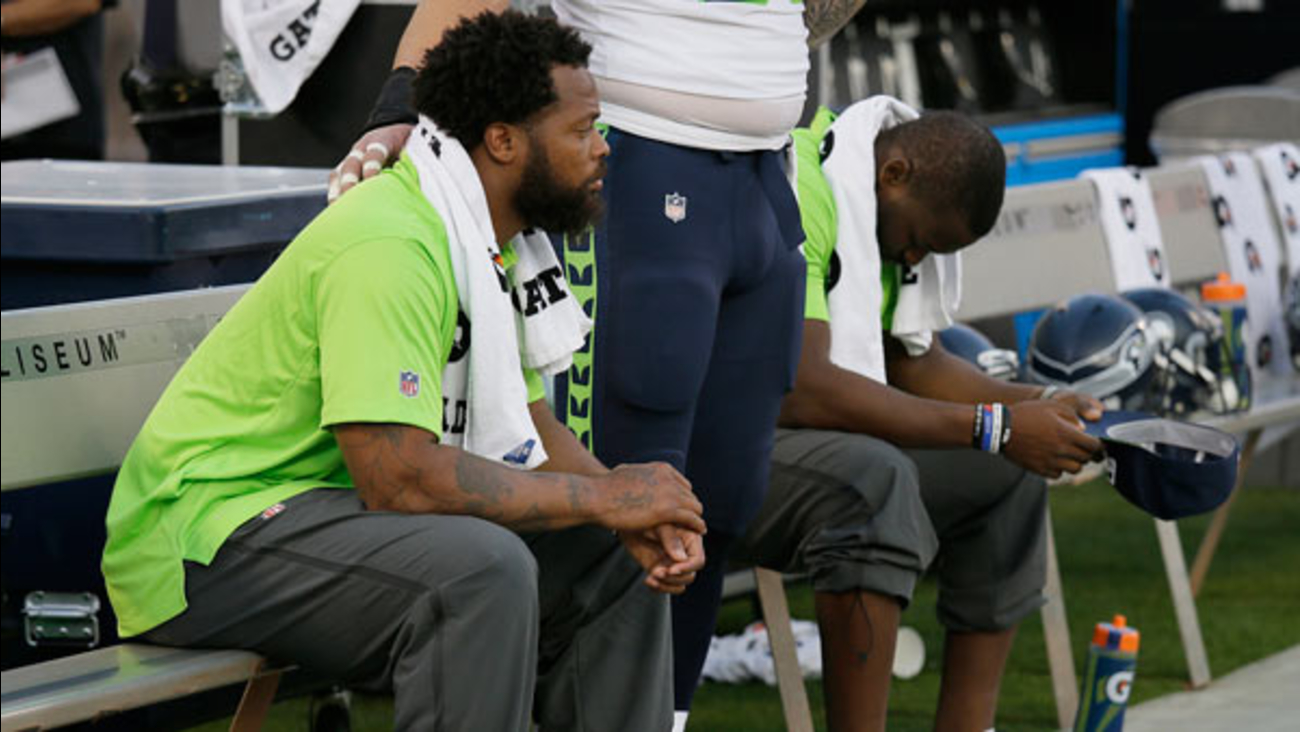 AP
By KEN RITTER
LAS VEGAS -- Seattle Seahawks player Michael Bennett accused Las Vegas police on Wednesday of racially motivated excessive force, saying he was threatened at gunpoint and handcuffed following a report of gunshots at an after-hours club at a casino-hotel.

Bennett said on a Twitter message titled "Dear World," that police "singled me out and pointed their guns at me for doing nothing more than simply being a black man in the wrong place at the wrong time."

Police later attributed a report of gunfire at Drai's at the Cromwell resort to the sharp sound of velvet rope stands being knocked to a tile floor. It happened a few hours after the Aug. 26 fight between Floyd Mayweather Jr. and Conor McGregor.

Bennett described the incident as "traumatic" during a brief appearance Wednesday at the Seahawks' facility.

"It's a traumatic experience for me, my family and it sucks that the country that we live in now sometimes you get profiled for the color of your skin," Bennett said. "It's a tough situation for me. Do I think every police officer is bad? No, I don't believe that. Do I believe there are some people out there that judge people by the color of their skin? I do believe that."

Bennett declined to go into specifics of the incident.

"I'm just trying to focus on the game, focus on the task at hand and let everything take care of itself," Bennett said. "But like I said this is a tragic situation for me, I hate to be up here at this moment. There is a lot of people who experienced what I experienced at that point, at that moment and they're not here to tell their story."

Bennett, a 6-foot-4 defensive end who has been a leader of the national anthem protests started by former 49ers quarterback Colin Kaepernick , said he was among several hundred people running away.

In his Twitter message, Bennett said he was handcuffed face-down on the ground after an officer held a gun to his head saying he would blow his head off if he moved.

"All I could think of was 'I'm going to die for no other reason than I am black and my skin color is somehow a threat,'" he wrote. He said he thought of his wife and children.

Bennett said he was taken to the back of a police car "until they apparently realized I was not a thug, common criminal or ordinary black man but Michael Bennett a famous professional football player." He was released without charges.

"Without looking at video footage or reading any reports we can't say yet what happened," Rivera said.

A video posted by celebrity news site TMZ shows a view from a balcony as a police officer kneels on the back of a man who looks like Bennett. Protests are heard, including, "I wasn't doing nothing," and, "I was here with my friends. They told us to get out and everybody ran."

Bennett's attorney, John Burris in Oakland, California, confirmed the words were Bennett's. The attorney said he believed the 30-second video clip showed some of how his client was treated.

"We think there was an unlawful detention and the use of excessive force, with a gun put to his head," Burris told The Associated Press. "He was just in the crowd. He doesn't drink or do drugs. He wasn't in a fight. He wasn't resisting. He did nothing more or less than anyone in the crowd."

Bennett's brother, Martellus Bennett, who plays for the Green Bay Packers, posted an Instagram account of a telephone call he said he got from Michael Bennett. He said he heard fear in his brother's voice.

"The emotion and the thought of almost losing you because of the way you look left me in one of the saddest places ever," Martellus Bennett said.

Michael Bennett has been one of the most outspoken pro athletes on numerous social issues. Last month, he held a benefit for the family of a pregnant black woman who was fatally shot by two white Seattle police officers in June. Police said the woman threatened the officers with at least one knife after calling 911 to report that someone had broken into her apartment and stolen video-game consoles.

Advocates on Wednesday cited Bennett's treatment by police as an illustration of troubled race relations in America.

Patrisse Cullors, a co-founder of the Black Lives Matter advocacy group, called it "a testament to the police violence targeting black people in the United States."

Cullors endorsed an online petition calling for Las Vegas police to release information about what she called an assault on Bennett.

Jocelyn Benson, chief executive of the nonprofit Ross Initiative in Sports for Equality, released a statement crediting Bennett with "courage and leadership in addressing issues of racial injustice in our country."