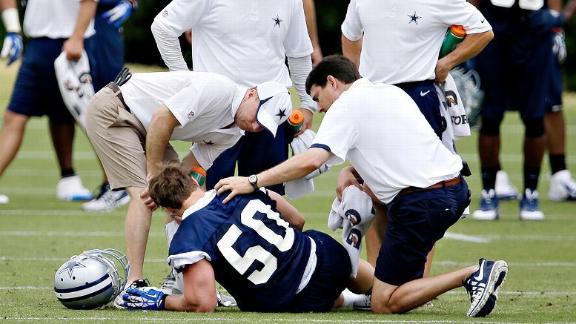 Dallas Cowboys middle linebacker Sean Lee has a torn ACL and a slight tear of his meniscus, injuries that are expected to sideline him for the 2014 season, according to sources.

The Cowboys have made no official statement regarding the results of the MRI performed on Lee's injured left knee, but the linebacker has been told the exam confirmed he tore the anterior cruciate ligament in the knee and he is not expected to play in the upcoming season.

Lee tore his right ACL in April 2008 while at Penn State, then partially tore his left ACL during the 2009 season.

"Sean has had to deal with injuries throughout college and also here in the NFL," coach Jason Garrett said earlier Tuesday. "He really does everything he can to get himself ready to play. Unfortunately, he had to deal with a few of those things, but he's as mentally tough as an individual I've ever been around. Whatever the circumstances are, he always puts his best foot forward and strives to be his best. I don't anticipate this being any different."

On the play on which he was injured, Lee appeared to be slipping while being blocked by rookie right guard Zack Martin on a screen pass. Lee remained on the ground and needed to be helped to the locker room by members of the training staff.

Lee missed five games last season with hamstring and neck injuries. He was cleared from the neck injury at the start of the offseason program in April.

He missed two games as a rookie in 2010 with a hamstring injury and one game in 2011 with a dislocated wrist, playing most of that season wearing a cast. Toe surgery forced him to miss 10 games in 2012.

The Cowboys signed Lee to a six-year extension last summer worth as much as $51 million. It included a $10 million signing bonus. The base value of the deal is $42 million, and Lee could have earned up to $9 million more if he played in at least 80 percent of the snaps.

Lee is vital to the Cowboys' defense. He led the team in tackles in 2011 despite the wrist injury, then finished fourth on the team in 2012 with 77 despite playing in only six games. Lee led the Cowboys in interceptions last season with four.

Report: Sean Lee Has Torn ACL
Ed Werder discusses the report that Cowboys LB Sean Lee has a torn ACL and is expected to miss the 2014 season. Herm Edwards discusses how a coach should control the tempo during organized team activities.