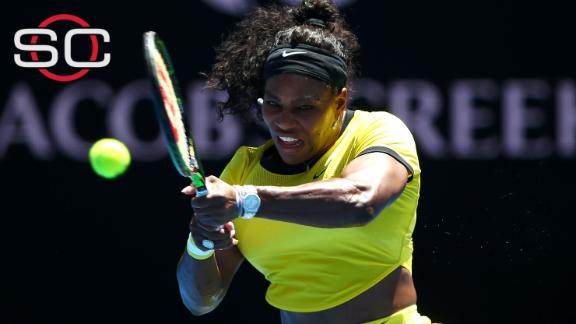 MELBOURNE -- After last year's infamous twirl-gate, Serena Williams is sporting a new look at this Australian Open: a yellow two-piece outfit with a crop top and pleated skirt.

That was definitely the case Friday. Williams played her third-round match so fast and furiously it was as if she needed to dash out and chase down a cellphone thief. Or make sure that teenage opponent Daria Kasatkina could get home well before curfew.

Williams said she chose the pleats because they are classic and the top because, well, "I live in a crop top, sleep in crop tops. I'm often never seen without one. So I thought it would be really fun to play in one."

She said she has been wearing many different designs and wanted to push the envelope again.

"Just bring pop culture to tennis, kind of make it really fun,'' she said of the design. "A lot of things you see on stage and just in that pop culture world, I wanted to bring that youth and that fun-ness to it.''

This match was a distinct contrast to much of Serena's 2015 Grand Slam season. Despite winning the first three majors and nearly completing a Calendar Slam, Serena lost the first set eight times and played three sets a dozen times, repeatedly placing her back against the wall and toes along the edge. She played so many sets at Roland Garros (five three-set matches) that she probably is still kicking the red clay from her shoes.

Despite the concerns about her health and sore knees along with her four-month layoff, this year is starting off more easily. After withdrawing from the Hopman Cup because of knee inflammation, Williams is playing in top form, winning in straight sets each round so far.

At 18, Kasatkina is so young she hadn't been born when Serena started her pro career. She was one of four teenagers in the third round, which was the first time four teens had advanced that far at the Aussie since 2009.

Kasatkina has a lot of promise. She won juniors at the French Open in 2014 and reached the third round of the US Open last year after qualifying as a lucky loser. She rose from 370 at the end of 2014 to 72 last year and is currently 69.

Serena, however, showed that Kasatkina is still a long, long, long way from No. 1. She also gained a fair amount of family revenge for Kasatkina defeating sisterVenusat Auckland two weeks ago.

And she did it quickly, leaving her plenty of time to do whatever is next on her schedule. Such as tying Steffi Graf for the most Grand Slam titles in the Open era with 22.

Serena will play 58th-rankedMargarita Gasparyanin the fourth round. The two have played once before, when Serenabeat her the first round at Wimbledon last summer. And it was only two sets.

"She has a great forehand up the line. She has a good serve. She mixes up the ball well,'' Williams said. "I thought she played really well at Wimbledon. She was fearless. I think she qualified at Wimbledon. She's obviously made leaps and bounds since then, gained a lot of confidence. She's here to play well and win. So am I.''

In a later match, Daria Gavrilova, who hasn't been an Australian citizen for very long, advanced to the round of 16 at Melbourne Park with a 6-4, 4-6, 11-9 win over Kristina Mladenovic of France.

The Russian-born Gavrilova, who became a permanent resident in 2013 and received her Australian passport in December, hasn't muted the country's celebration for its latest breakout tennis star.

The crowd roared when Gavrilova broke Mladenovic to go up 10-9 in the final set, chanting "Dasha, Dasha, Dasha" on the changeover. After she closed it out, she said, "I want to hug the whole stadium."