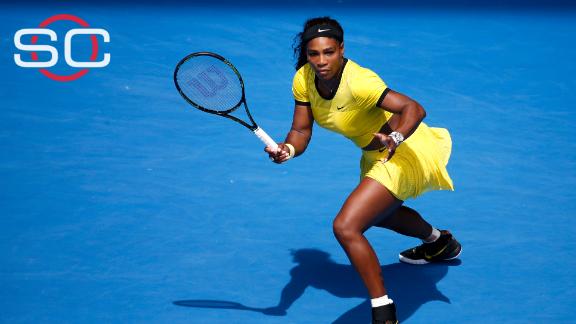 MELBOURNE, Australia -- Although she is perhaps the greatest server of all time, Serena Williams'superior return told the story this time.

An ultra-competitive opening set eventually gave way to a landslide as the world No. 1 rolled to a 6-4, 6-1 win overMaria Sharapova to advance to the Australian Open semifinals.

For the 18th straight time, Williams upended her Russian opponent in piling on a win streak that dates back more than a decade -- 4,088 days to be exact.

"Doesn't matter who I'm playing, I just try to go out there and play the best I can," Williams said. "It's not necessarily anyone in particular."

In a titanic first set, No. 5 Sharapova broke Williams in the opening game and then held. The Russian stood firm on the baseline by taking balls early and keeping her opponent on her heels.

But after falling into a 2-0 hole, Williams reeled off six of the next eight games to take the early advantage. At 4-4, Williams fended off two break points in a grueling game. In the next game, Williams finally put away an open-court volley, her fourth set point, to secure the set.

"Yeah, I just started slow," Williams said. "I missed three or four easy shots. I felt like, 'All right, I didn't make those shots, but if I had made those shots, I probably would have won that game.' I just clung on to that and knew I could play better."

The second set was vintage Williams. The world No. 1, who has won 12 straight matches Down Under, was up 5-0 before Sharapova finally won a game to avoid the bagel. In the Sharapova-Williams rivalry, only twice has Williams won a 6-0 set.

Sharapova, who came into the match with a tour-high 52 aces in this tournament, could muster only three in this encounter. She was broken four times.

"I think if you're serving maybe 180 against somebody else compared to Serena, that's an ace," Sharapova said. "Against Serena, as we all know, the return is one of her great strengths. She's very explosive. She stays quite close to the baseline. She cuts the ball early. She doesn't give you many angles. That's the reason I can't get so many free points against her."

Williams will next play Agnieszka Radwanska, who beat Carla Suarez-Navarro 6-1, 6-3 in 1 hour, 21 minutes early in the day.

Radwanska committed only 10 errors while frustrating her opponent throughout the encounter to become the first Polish player to reach the final four Down Under.

"Very, very pleased," Radwanska said in her on-court interview. "I knew it was going to be tough. She is a very tough player. I knew everything was going to come back to me. Just tried to be focused."

As hot as she has been, Radwanska is fortunate to still be alive in Melbourne. In the previous round, she pulled off a dramatic 6-7 (6), 1-6, 7-5 win overAnna-Lena Friedsamin amatch in which the German blew a third-set lead and suffered from severe cramps.

"Just happy I had a day off between matches," Radwanska said. "You go on court, and you feel good that you could win. The second week of Grand Slams, it doesn't matter who you are playing."

Radwanska, the No. 4 seed from Krakow, Poland, opened this season with a win at the Shenzhen Open for her 18th career title. In her past 25 matches, she has sported a healthy 22-3 record.

It wasn't that long ago that she was all but forgotten. After a largely disappointing 2015, Radwanska ended the past season with the biggest title of her career at the WTA Finals. That she qualified at all was amazing, considering that after the US Open, Radwanska was three spots out of the final spot.

In 2012, Radwanska reached her lone Grand Slam final, in which she fell to Williams in a tense, three-set Wimbledon championship.

Last year, Williams won here to kick-start a run to an almost calendar-year Slam. After sweeping through the first three majors, Williams fell in the semifinals of the US Open to end a shot at rare history.

Admittedly fried both mentally and physically, Williams then took four months off. When she returned in Melbourne, Williams retired from her first match at the Hopman Cup, citing knee inflammation, and eventually pulled out of the event.

Through five rounds at the Australian Open, however, Williams has looked very much the No. 1 player she has been for the past 154 weeks. She has yet to drop a set, a welcome sign for a player who found herself in the crucible of three-setters a year ago.

Williams is now two wins away from her 22nd major title, which would tie Steffi Graf for the most in the Open era.

Serena takes down Sharapova in straight sets
Serena Williams defeats Maria Sharapova 6-4, 6-1 in the quarterfinals at the Australian Open.