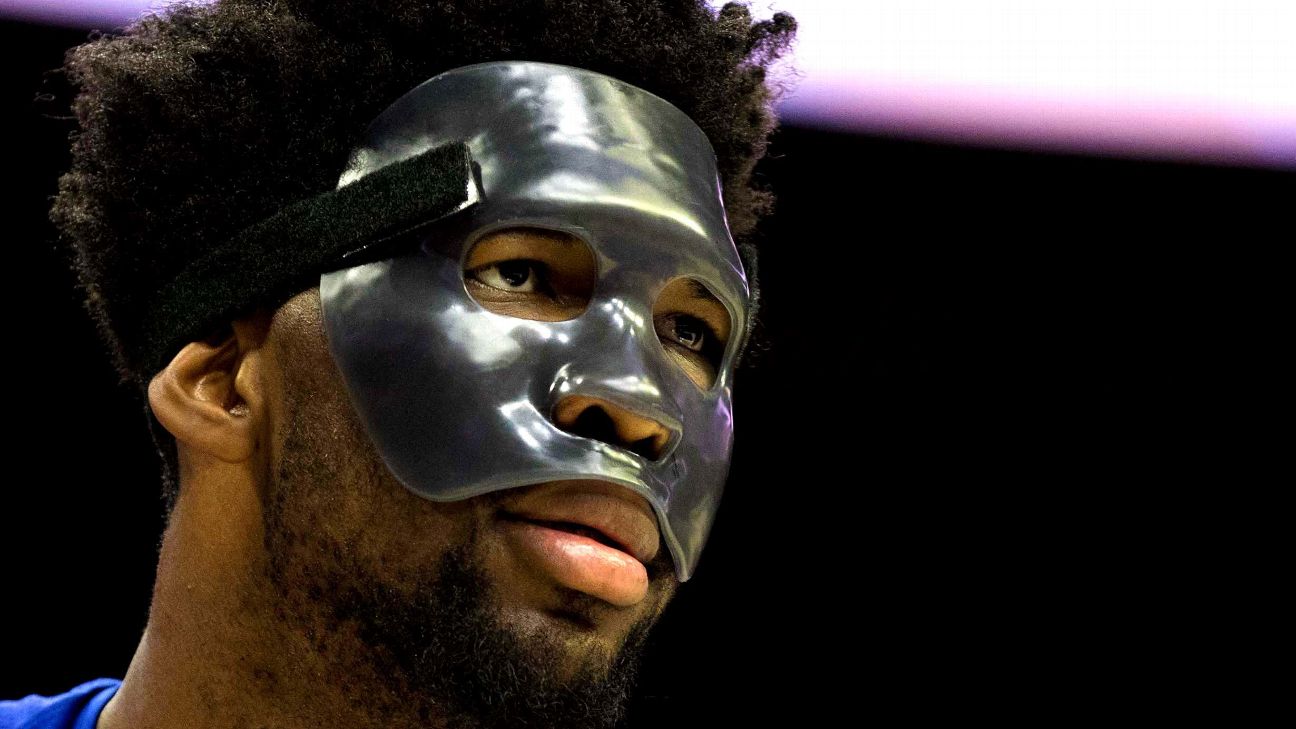 Afterward, Embiid had a bold message for the Heat.

"I'm going to be a nightmare for them," the All-Star center said.

Embiid had missed the past three weeks due to injuries suffered when he collided with teammateMarkelle Fultz during a game. In addition to suffering a concussion, Embiid had multiple fractures of the orbital bone, sources told ESPN's Ramona Shelburne.

He played Thursday's game with a black mask to protect the injury. Embiid called the mask "annoying" and predicted that he'd have to wear it for eight weeks.

The mask itself earned attention during the game when Heat wing Justise Winslow intentionally stepped on the goggles that were connected to it.

"Justise stepped on it and tried to break it with his hands, but little do they know I have about 50 of them," Embiid said. "So it's going to take much more than that to get me out of the series."

Embiid acknowledged that the mask bothered him at times Thursday night.

"At the end of the day, no matter how much it bothers me I still got to be a basketball player," he said. "If the shots aren't falling or it gets foggy and I can't see, you know, there's a lot of different stuff I can do."

Embiid was at his best midway through the fourth quarter, when he scored seven consecutive points to help seal the win for Philadelphia. The Sixers outscored Miami 32-14 in the final quarter.

"I felt like it was time for me to work," Embiid said. "I was lucky that the shots were falling for me. ... I thought they were some tough shots."

Embiid also blocked a shot and altered another one in Philadelphia's win. Afterward, he had another bold message for Miami.

"I feel like I'm the best defensive player in the league," he said.

Embiid was listed as doubtful for Game 3 on Thursday morning and was upgraded to probable two hours before tipoff.

Embiid said he was cleared to play after a conversation with the team medical staff and surgeons.

"I felt like it was the time to come back, especially how physical [the Sixers' Game 2 loss] was," Embiid said. "I love this moment, I love being physical, I love contact, so I felt like they needed me in that way."

Embiid has been approved by the league to wear a face mask made from a mix of carbon fiber and polycarbonate to protect his injury. The mask has protective eyewear built into it.

Because the Sixers' physicians, including Embiid's surgeon, and the league's independent medical consultants, including a craniofacial surgeon, determined that for his specific fracture he would be at increased risk for potential re-injury if he were to play in just a polycarbonate face mask.

The Sixers tested his mask for 10 days at the University of Pennsylvania to make sure it would protect him, sources told Shelburne.

This is the second time Embiid has injured this area of his face. The first time was in college at Kansas.

The mask is dark in color but translucent.

The league approved this upgraded mask once it was satisfied it would protect Embiid while not affording him any competitive advantage.

The Sixers were doing testing on this mask for the past 10 days to make sure it was ready once he was cleared.