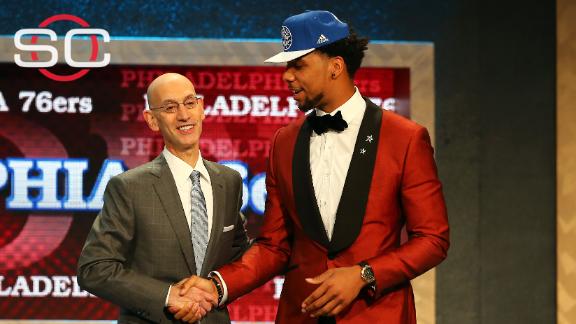 PHILADELPHIA -- Jahlil Okafor could get a solo turn as the next big man to put the76ers' fate on his 6-foot-11 frame.

Joel Embiid would still like a try to lead them on his own two feet. But his future with the franchise remains very much in doubt.

Philadelphia president Sam Hinkie could have put last year's postdraft news conference on replay, with many of the same concerns about Embiid's recovery from a broken right foot still as valid as they were in 2014.

Hinkie at least had a time frame last year, that Embiid shouldn't need more than eight months of recovery.

Now? Who knows. Not even some of the top doctors are sure how long it will take for Embiid to heal and finally play for the Sixers.

"It was healing on a steady, upward-sloping curve," Hinkie said Friday. "It doesn't seem to be healing as well anymore. The way they're describing it to me is, we'd have expected it to be healed, even more healed, than what it's showing now."

Hinkie said surgery has not been ruled out and a course of action would be decided "soon" after Embiid meets with a North Carolina specialist.

Embiid, the No. 3 overall pick in the 2014 draft, sat out all season -- though he raised hopes late in the season when an on-track recovery had him shooting, running and dunking at practices and pregame drills.

But one more CT scan on the foot before summer league showed the navicular bone was a tricky one to heal.

"It just looked different," Hinkie said. "He had no symptoms. He doesn't have any pain. It hasn't really been bothering him. He had been many, many weeks without even any soreness."

What he found behind No. 3 Pick 2.0 was yet another big man with untapped potential and franchise-shifting talent.

TheDukecenter was a healthy option for the Sixers -- and the choice Hinkie tried to sway the public was his top option even with a healthy Embiid.

"I'd like to think we'd have had the courage to do it anyway," Hinkie said.

Okafor joined a frontcourt that could include Embiid and will include power forward Nerlens Noel. Hinkie said all three could coexist in the lineup and there are ways to make the triple threat a reality.

"There are some things that can work with these pairings," Hinkie said.

That's on coach Brett Brown to figure out, should they ever play together.

He also has to figure out who will get the big men the ball. Philadelphia's first five picks of Thursday night's draft were all centers and power forwards and all were at least 6-foot-10.

That left the Sixers with Tony Wroten and Isaiah Canaan as their two true ball handlers, and neither screams "All-Star." Hinkie said he would look for perimeter players this summer. He doesn't have much of a choice.

Okafor tweeted Friday, "Philly here I come! Driving down from NY. Ready to work," with a photo of him wearing a 76ers cap.

Like most GMs after the draft, Hinkie raved about Okafor's potential.

Okafor, 6-foot-11, 270 pounds, averaged 17.3 points and 8.5 rebounds in his lone season at Duke and helped it win a national championship.

"You don't see players like Ja in today's era," Hinkie said. "They don't come along in a way where you're looking to feed them over and over and over. Where they've been commanding double-teams since they were 12 or 13 years old and been learning to deal with those."

Okafor will play in summer leagues in both Salt Lake City and Las Vegas.

Hinkie hoped some combination of Okafor, Embiid and Noel could lead the Sixers out of the lean years and into contention for their first NBA title since 1983.