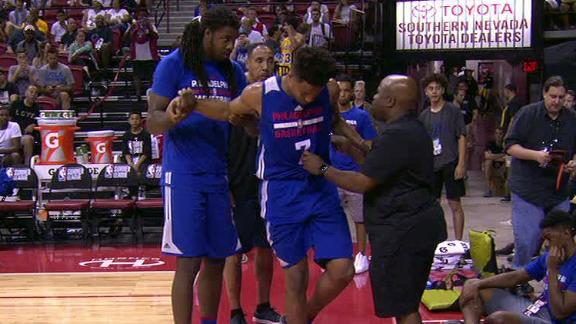 Philadelphia 76ers rookie Markelle Fultz will not play for the rest of the summer league because of a left ankle sprain suffered on Saturday in Las Vegas, the team announced Sunday.

Fultz was helped off the court after rolling the ankle in a game against the Golden State Warriors. The team said Sunday that X-rays were negative but that a lateral ankle sprain will prevent him from taking part in basketball activities for one to two weeks.

Fultz was walking around on Sunday and said he was relieved the injury wasn't serious.

"The foot's not broken, nothing like that so I'm good. I'm walking around," he said.

Fultz, the No. 1 overall pick in this year's NBA draft, wasn't the only 76ers player injured in Saturday's 95-93 win. Second-year guard Timothe Luwawu-Cabarrot suffered an upper lip laceration and had to be stitched up.

The Sixers have dealt with significant injuries to center Joel Embiid and last year's No. 1 pick, Ben Simmons, over the past three years, a fact Embiid appeared to acknowledge in a tweet posted shortly after Fultz was helped off the court.

ESPN's Ohm Youngmisuk and The Associated Press contributed to this report.