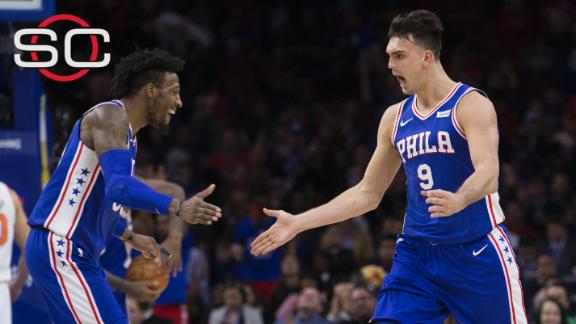 PHILADELPHIA -- The Philadelphia 76ers have signed veteran 3-point specialist Marco Belinelli, whose contract was bought out by the Atlanta Hawks.

Philadelphia announced the move Monday ahead of the Sixers' matchup with the New York Knicks.

Belinelli was averaging 11.4 points in 23.3 minutes per game with the Hawks, who bought him out to allow him to join a contending team. The Sixers held the eighth playoff position in the Eastern Conference entering Monday night's game.

The 31-year-old said he chose Philadelphia overOklahoma City, Toronto, Milwaukee and Portlandlargely because he believes the 76ers are a team on the rise and wants to help their playoff push. He's also looking forward to playing alongside Ben Simmons and All-Star Joel Embiid.

"I trust the process," Belinelli said. "I was lucky to watch a couple of games. They play real well together on offense and defense. I want to help this team make a run. I'm really happy."

Philadelphia coach Brett Brown said it shows how far the team has come that a player would choose the 76ers.

"That's a statement for the program," he said.

An 11-year veteran, Belinelli has made 945 3-pointers in his career, connecting on 37.7 percent of his attempts from beyond the arc.

Brown said Belinelli was available against the Knicks, though Belinelli admitted it would take him some time to get comfortable in the new system.

The Sixers are the ninth team for the Italian, who had one of his best seasons in 2013-14 withSan Antonio, when he made 43 percent of his 3-point attempts and helped the Spurs to the NBA title. He also won the 3-point contest at All-Star Weekend that year.