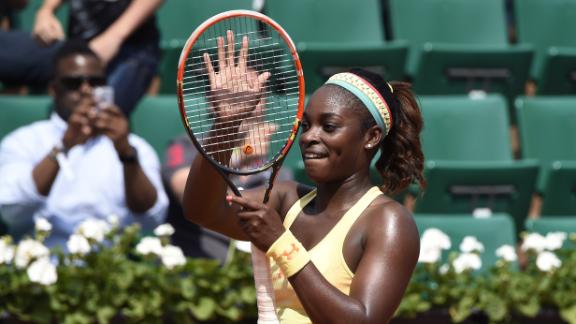 PARIS -- Getting her game in gear at a Grand Slam tournament, as usual, Sloane Stephens moved into the French Open's fourth round for the third consecutive time.

Now comes the 15th-seeded American's toughest test yet this year at Roland Garros, a matchup against No. 4 Simona Halep of Romania. Neither has ever made it to the quarterfinals in Paris.

"Obviously, as the tournament goes on," Stephens said, "the competition gets tougher."

She eliminated No. 22 Ekaterina Makarova of Russia 6-3, 6-4 Saturday, while Halep beat 55th-ranked Maria-Teresa Torro-Flor of Spain 6-3, 6-0 as the temperature approached 70 degrees (20 Celsius) on the sunniest afternoon of Week 1 at the clay-court major after several days of overcast skies and occasional rain.

At No. 4, Halep is the highest seeded woman left at Roland Garros, because of early losses by No. 1 Serena Williams, No. 2 Li Na and No. 3 Agnieszka Radwanska.

"That's a surprise for everyone," said Halep, the runner-up on clay at Madrid three weeks ago. "Is not easy to be the (top) seeded now, during the tournament. But I try just to keep ... the pressure (away)."

In other action Saturday, 2009 French Open champion Svetlana Kuznetsova came back to beat an error-prone fifth-seeded Petra Kvitova 6-7 (3), 6-1, 9-7, while the 2008 title winner at Roland Garros, Ana Ivanovic, bowed out with a 6-3, 6-3 loss to 23rd-seeded Lucie Safarova of the Czech Republic.

The 27th-seeded Kuznetsova, who also won the 2004 U.S. Open, broke at love in the final game when a 13-stroke exchange was capped by a missed forehand by Kvitova, her 65th unforced error on a day the 2011 Wimbledon champion repeatedly sought treatment from a trainer and had a bandage on her upper right leg. Kuznetsova, meanwhile, made only 20 unforced errors in the 3-hour, 13-minute match and faces Safarova next.

Tenth-seeded Sara Errani, the 2012 French Open runner-up to Maria Sharapova, made only seven unforced errors in her 6-0, 6-1 victory over 98th-ranked Julia Glushko of Israel. Errani now plays 2008 U.S. Open runner-up Jelena Jankovic, a 6-1, 6-2 winner against No. 26 Sorana Cirstea of Romania.

Halep, a Romanian, was the girls' champion at Roland Garros in 2008, but she had never been past the second round of the French Open's main draw until this year.

Stephens has shown a decided knack for performing far better at Grand Slams than run-of-the-mill events. This is the sixth straight major where she's made it to the second week, the longest active streak among women and a run that began with a semifinal appearance at the 2013 Australian Open.

What feels different about a Slam for her?

"Nothing. I don't know. I don't know. I'm not sure. Honestly, if I had the answer and I knew," Stephens said, pivoting in her new conference chair and holding her arms out wide, "I would tell you guys. I'd be like, Oh, yeah!' But I can't even think of anything. Like, I don't know."