On Saturday officials unveiled a bronze statue of the boxing legend outside of XFINITY Live! in South Philadelphia.

Promoter Joe Hand Senior told those in attendance, "You see the legend sculptured in bronze, larger than life. It's of giant proportion, just like Joe Frazier."

Hundreds gathered to see the statue of the boxing legend unveiled. It now stands at the site of the fighter's numerous victories. 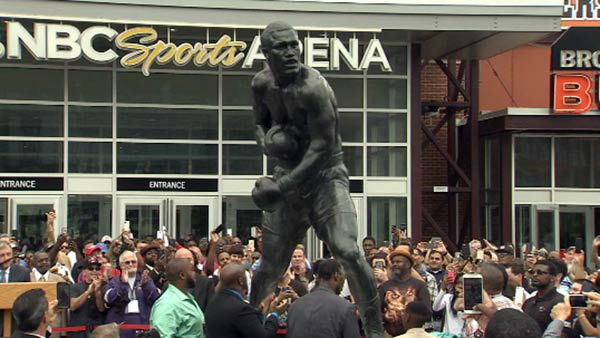 Boxing announcer Dan Baker said, "Inside the footprint of the Spectrum on the site where Joe Frazier fought and won."

Frazier won gold at the 1964 Olympics. He was sent to the games as an alternate after Buster Mathis was injured.

Mayor Michael Nutter said that should serve as a lesson to all, saying, "You never know when your moment will come, and when it does take advantage of it like Joe Frazer."

And Frazier seized the moment when he knocked out Muhammad Ali in the "Fight of the Century" in 1971.

But those who honored Frazier at the ceremony, recalled not only the prized fighter, but the dedicated family man.

Former Pennsylvania Governor Ed Rendell said, "We will never see the likes of Joe Frazier again, we will never see someone as tough, strong, loyal, and as gentle, and all of the good qualities he embodied."

Joe Hand Senior said, "This statue will serve as a constant reminder that we Philadelphians walked beside a man who was a true champion both in an out of the ring."

Many say the honor is decades overdue. But Frazier's family is grateful for this day.

His son, Marvis Frazier, says, "It took a little while, but it's here and the Fraziers say thank you."