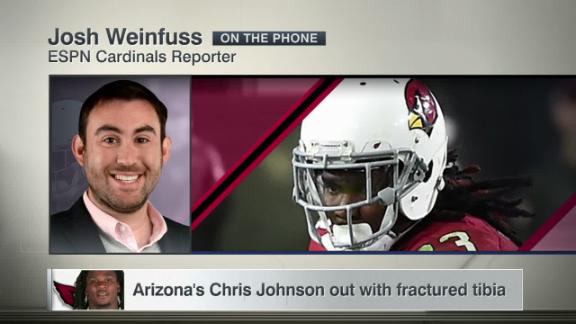 Cardinals RB Chris Johnson will be out an extended period of time with a fractured tibia, a league source told ESPN's Adam Schefter.

Johnson, who is fourth in the NFL with 814 rushing yards, was injured in Sunday's 19-13 victory at San Francisco. The injury was first reported by Fox Sports.

Johnson is in the midst of a comeback year after signing with Arizona late in training camp.

Johnson signed a one-year contract at the veteran's minimum of $870,000, with a deal loaded with incentives. He has said he thought teams stayed away from him after he was shot while riding in a van in Orlando, Florida, one early March morning. One passenger in the van was killed, and another was injured. Johnson still has the bullet in his shoulder.

Johnson has said he believes he would have been killed had he not leaned over to check a text message on his phone. He said he was ordered to bed rest for six weeks and lost 25 pounds before going to Los Angeles to work his way back into football shape.

When Ellington was nursing an injury, Johnson took the starting running back job with strong early performances.

In the third game of the season, at home against San Francisco, Johnson rushed for 110 yards on 22 carries. Later, at Detroit, he gained 103 yards on 22 attempts. He gained a season-high 122 yards (on 18 carries) in a Monday night game against Baltimore and followed that with a 109-yard game on 22 rushes at Cleveland. However, his production had dipped in recent games.

In Sunday's game, Johnson carried 12 times for 17 yards before limping off with the injury.

Johnson, 30, made the Pro Bowl three times and topped 1,000 yards rushing in each of his six seasons with the Tennessee Titans. In 2009, he led the NFL in rushing with 2,006 yards. He played one season for the New York Jets before being released.

The loss of Johnson would be a blow to an Arizona team that, at 9-2, has the second-best record in the NFC.

Without Johnson and Ellington out, rookie David Johnson would move into the No. 1 running back spot. David Johnson scored Arizona's first touchdown Sunday with a 5-yard run.