Source: Jamaal Charles to have follow-up procedure on knee 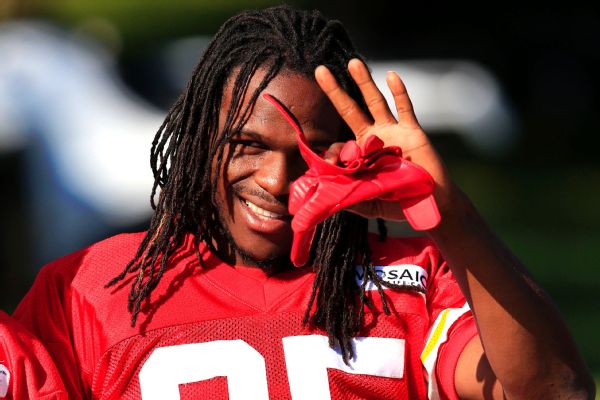 Charles began having soreness in his surgically repaired right knee two weeks ago, leading up to the Chiefs' Week 7 game against the Saints.

A source told ESPN that Charles will have what is described as a "hopefully pretty minor procedure done [on the knee] tomorrow." A source said Andrews wants to take a look at the knee with a scope to determine the necessary procedure and will communicate with the Chiefs' medical staff after he is finished.

The move to IR means Charles will miss at least eight weeks.

Charles, who turns 30 in December, could conceivably return for the final two games of the season and the playoffs, if the Chiefs reach the postseason. But given the continued setbacks he has had since tearing his ACL last October, a return seems unlikely.

Charles was unable to return for practice at the start of training camp, as the Chiefs thought he would. Once he did return, Charles did little at practice for several weeks. His first game action of the season came in Week 4 against the Pittsburgh Steelers, but he never regained his role as the full-time featured back.

This season, Charles has played in three games with 12 carries for 40 yards and two receptions for 14 yards. He scored a touchdown against the Oakland Raiders on a 4-yard run.

Charles didn't play in Sunday's game against the Indianapolis Colts after experiencing soreness in the knee.

The IR designation could mark the end of Charles' career in Kansas City. His contract with the Chiefs runs through 2017, when he is scheduled to make $3,750,000 with a roster bonus of $3 million.

Spencer Ware has filled in well this season as the Chiefs' starting running back, although he suffered a concussion in the Colts game and has been in the league protocol. Charcandrick Westis his backup.

The Chiefs had Trent Richardson, the former No. 3 overall pick in the draft, in for a workout Tuesday.