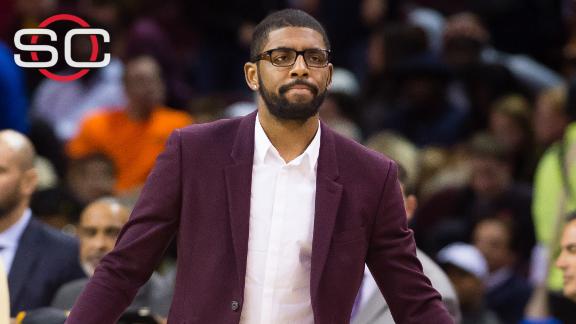 Irving, sidelined for the first 23 games of the Cavs' season while recovering from surgery in June to repair a fractured left kneecap suffered in Game 1 of the NBA Finals, was cleared for full contact more than a week ago and has been through a handful of practices since without any setbacks.

Irving's final hurdle before the team approves of his intention to play will involve a series of physical tests to measure his body's strength and responsiveness, a team source told ESPN.com. The tests will be similar to the ones administered on Irving before he was allowed to return for Game 4 of the Eastern Conference finals againstAtlantalast spring after sitting out Games 2 and 3 with tendinitis in his left knee.

Irving's potential return comes at a good time for the injury-riddled Cavs. Guard Iman Shumpert left Cleveland's 89-77 win over the Boston Celtics with 8:35 remaining in the fourth quarter Tuesday and did not return because of a right groin injury.

Shumpert is not scheduled for an MRI; however, he could require the test Wednesday after the Cavs return to Cleveland depending on how his body responds to treatment overnight. Shumpert has already been ruled out of the Thunder game, a source told ESPN.com.

"A little bit concerned," said Cavs coach David Blatt when asked about Shumpert. "I got to be honest with you. I have no idea what the extent is, I'm just, given what our recent history has been, I'm concerned."

Tuesday was Shumpert's second game back to the lineup after missing the start to the season with a right wrist injury suffered just days before the start of training camp. The injury required surgery. Shumpert, a fifth-year veteran, had 14 points and three rebounds in 25 minutes Friday againstOrlandoand followedwith six points, one rebound, one assist and one blocked shot in 14 minutes against Boston before exiting the game.

Shumpert suffered a strained left groin in the Cavs' second-round series win againstChicagoin May, and the discomfort lingered throughout the remainder of his team's postseason run. The difference between that injury and what Shumpert suffered Tuesday is that the pull did notoccur as high in the groin area, a source told ESPN.com. The initial diagnosis of the injury seems to be less severe.

While Shumpert told ESPN.com last month, "With the way I play, I just realize in my mind, I'm going to get hurt," he was clearly upset by Tuesday's setback. Shumpert sat at his locker with his head down for nearly 30 minutes while reporters conducted postgame interviews, and he declined a request to talk through a team spokesman.