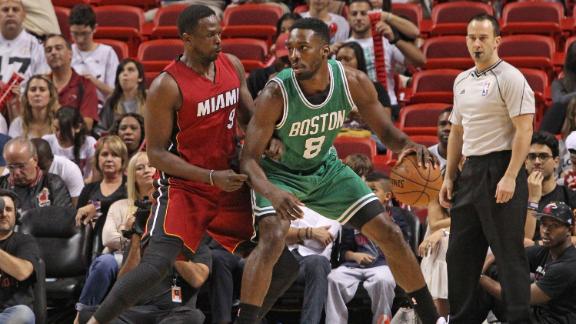 The Memphis Grizzlies, looking to bolster their scoring options on the wing in the ever-competitive Western Conference, are actively trying to obtain Miami's Luol Deng or Boston's Jeff Greenahead of the Feb. 19 trade deadline, according to league sources.

No deal is imminent, sources said, but it has become clear that the Grizzlies are intent on upgrading their wing rotation. The teams behind third-place Memphis (25-10) in the Western Conference standings already have made notable in-season additions -- such as Dallas (Rajon Rondo) and Houston (Corey Brewer and Josh Smith) -- and Oklahoma City has yet to move into playoff position.

It is not immediately known how willing Miami would be to trade Deng, who is not even halfway through his first season of the two-year, $19.9 million contract he received from the Heat in the wake of LeBron James' return to Cleveland via free agency.

Miami, though, already is five games below .500 at 15-20 as it begins a challenging five-game road trip out West, leading some around the league to wonder whether Heat officials would indeed be open to moving Deng to start trying to acquire future draft picks or other trade assets because they currently possess so few.

Green, meanwhile, is widely believed to be available leading into the deadline in the wake of Boston's deal to send Rondo to Dallas last month. However, Green told local reporters last week on the eve of Rondo's first game at TD Garden as a visiting player that he doesn't "want to know how that feels because I don't want to be traded."

Any Grizzlies offer for Deng or Green is likely to feature the $7.7 million expiring contract of Tayshaun Prince as well as the promise of future draft compensation.