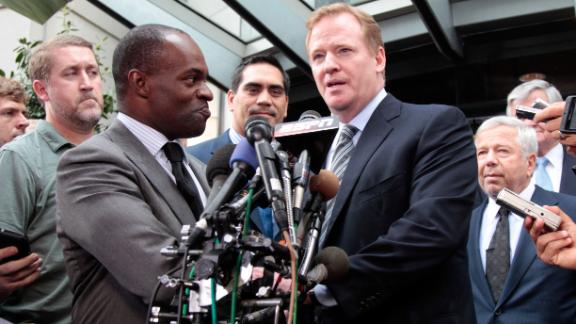 After three years of battles, the NFL and the NFL Players Association have intensified negotiations to implement HGH testing for the first time in league history in addition to revamping its drug-testing policy, per multiple sources familiar with talks about a revised policy.

Although the sides are trying to come to an agreement before Sunday's slate of regular-season opening games, sources say there remains a "fragile" state of talks as the proposed revised policy is being finalized. Sources on both sides caution on the basis of sensitive negotiations that have previously imploded.

"Players who have been to any collective bargaining negotiation understand that we never describe them as 'very close,'" NFLPA president Eric Winston said in a statement. "We look at every issue we can to improve the rights and benefits of players. This process takes time, it takes creativity and it is never easy.

"We want to get a new agreement in place, but we understand the responsibility we have to the players and to the game. It is critical that we get this right."

HGH testing -- performed under the cover of the NFL's policy on anabolic steroids and performance-enhancing drugs -- is expected to begin within 10 to 14 days if the sides reach agreement, per sources. It will be conducted the day before games and the day after games but not on the day of games, sources said.

The obstacles the sides are trying to overcome on sweeping changes do not hinge alone on HGH testing but rather also on other matters related to DUIs, marijuana thresholds, due process and whether initial HGH testing will include a population study this season to determine appropriate thresholds for football players.

One sensitive issue involves any player arrested for driving under the influence. The league wants the ability to discipline players immediately upon a DUI arrest as opposed to allowing due process to complete its course, sources say. It's one example of why talks remain fragile, sources say.

The union and its players will not sign off on an overhauled drug policy without a radically altered appeals process for players that will be overseen by neutral arbitration and not by commissioner Roger Goodell, sources say.

The potential agreement would consummate more than three years of talks, from the time that the NFL and NFLPA thought they had an agreement in principle for HGH testing in August 2011, after the sides agreed to a new collective bargaining agreement.

Since then, the sides have bickered over the issue and failed to push it through. In the past couple of weeks, however, NFLPA executive director DeMaurice Smith was especially aggressive in trying to get HGH testing for this season, and his efforts have spurred a pending agreement.

Now, in the span of less than a week, the NFL has enacted a new domestic violence policy and, with the help of the NFLPA, hopes to enact a revised drug policy that includes HGH testing, which will not be cheap to owners, who pay everything related to testing. Each HGH test will cost $2,500.

A new drug policy would include radical changes in the following areas:

Marijuana thresholds for a positive test would be increased, including players being afforded more strikes for positive tests before suspensions are imposed.

Just as sweeping, if the policy is finalized, certain substances such as Adderall, Ritalin and other amphetamines will shift from the PED policy to the substance abuse policy, specific to an offseason positive test.

Currently, a player who tests positive for Adderall or related amphetamines faces an automatic four-game suspension for a first-time offense under the PED policy.

Since August 2011, 29 players received four-game suspensions for violating the PED policy who would not be suspended under these proposed guidelines. Also in that time frame, 128 appeals would have been assigned to a third-party hearing officer instead of the commissioner's designee. And 22 players who would have been suspended for a DUI were instead fined two game checks and a maximum of 50,000.

Theoretically, Broncos wide receiver Wes Welker would not have been suspended because his positive test was in May and not in-season, per sources.

One critical element of the negotiations is the players' demand that a neutral arbitrator would hear and rule on all appeals of positive tests from both the substance abuse and PED policies.

A contentious element in the negotiations pertains to the appeals process related to non-positive tests that result in players who are identified in cases such as BALCO and Biogenesis, where it is determined that players purchased HGH or steroids.

Under the proposal for a non-positive PED violation, Goodell still would determine the penalty. But if a player appeals on the basis that his rights to due process were violated, a three-person arbitration panel would decide on the matter of due process.

If the panel rules in favor of the player as it relates to due process, a neutral arbitrator would receive the sole binding authority to rule on a non-positive test as alleged.

One such instance happened in 2007, when Goodell suspended Patriots safety Rodney Harrison after the NFL received information that law enforcement officials identified Harrison as a buyer of HGH through an Internet pharmaceutical company.

Harrison was suspended for the first four games of the '07 season. Goodell considered banning him for a year but showed leniency after Harrison admitted he purchased and used HGH, saying he did so to facilitate healing from injury.

The element of penalties for a non-positive case such as Harrison was disciplined remains critical to a resolution. HGH was added to the NFL's banned substance list in 1991, but no test through urine samples that has detected its use.

HGH testing still remains a work in progress in all sports even with blood samples -- less than 1 percent of all athletes worldwide have tested positive for the drug.

Many of these changes are progressive and, in the eyes of many around the league, overdue. Cleveland Browns offensive tackle Joe Thomas said after his team's preseason finale -- one day after the yearlong suspension of receiver Josh Gordon was upheld -- that the NFL's drug program was out of date.

"Obviously there were some oversights when they wrote the program and some cultural changes that have happened, so that the program doesn't accurately reflect the morals of society today," Thomas told reporters. "I think looking at the NFL drug program, they haven't touched it in a lot of years because it's kind of been the one thing where, when you're collective bargaining, it kind of gets put 'til the end. And then when you're close on a deal, you say, 'Oh, let's just leave it how it's always been,' rather than actually work on some issues that are there.

"The problem is, now you're sitting in a situation with a collective bargaining agreement that lasts 10 years, and in the middle of it, no one is going to want to go back and try to hash out things that may be an issue -- as they clearly are on some levels."

The NFL and NFLPA recognized what Thomas said and have been working to change things for weeks. A new drug policy has been crafted to match the new domestic violence policy.

Now there is hope for another, equally dramatic new policy to go along with a new season.