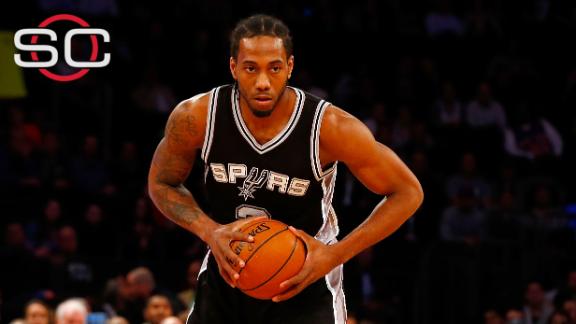 The deal will be for five years and $90 million, although the final terms won't be established until next week when the maximum salary is finalized. The Spurs likely will wait to actually sign the contract so they can free up cap space to chase other free agents, including LaMarcus Aldridge, sources said.

Leonard struggled down the stretch in the postseason, shooting 29.6 percent from the floor over the last three games of the Spurs' opening-round loss to the Los Angeles Clippers after scoring a career-high 32 points in Game 3 followed by 26 in Game 4. Nonetheless, the Spurs planned long before that to prioritize bringing back the 2014-15 NBA Defensive Player of the Year with a max contract.

"The team will probably look considerably different than it looks this year because we have so many free agents and we want to retool a little bit," Spurs coach Gregg Popovich said after the season. "We want to try to start -- not exactly over again -- but these last four seasons have been a grind. And we put the team together with that in mind, that this year we'd have all the free agents so we can decide what we want to do moving forward as far as the makeup of the team."

Leonard flourished during the team's 20-4 run from Feb. 27 through the end of the regular season, and Popovich has said on multiple occasions he views the versatile small forward as the future of the franchise.

San Antonio assumed Leonard would field several four-year max offers, but he wasn't expected to seriously consider any of them because of his desire to stay with the Spurs as one of the organization's key building blocks. Besides, as a restricted free agent, Leonard was considered a lock to return to San Antonio given the club can match any offer he received in free agency.

The expectation in Spurs circles, ESPN.com's Marc Stein previously reported, was that the organization and Leonard would come to a quick verbal agreement on the new deal to free up the front office to make other moves in free agency and ensure that the math would work.

In October 2014, the Spurs decided to hold off on signing Leonard to an extension because they wanted to preserve as much cap flexibility as possible heading into the summer.