Sources: Mavericks like chances at bringing on David Lee 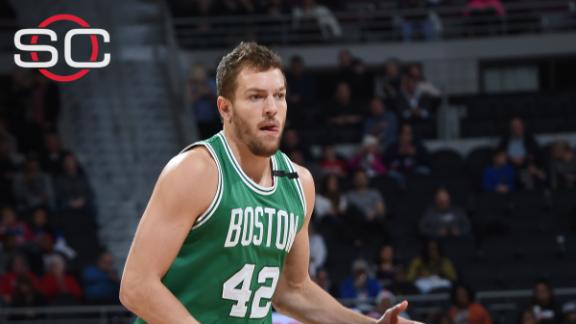 TheBoston Celticshave waivedDavid Leea day after revealing they were in talks with theveteran big man on terms for a buyout to end his brief tenure with the team.

"We thank David for his contributions to our organization and wish him nothing but the best in the future," president of basketball operations Danny Ainge said in a statement Friday.

Lee, because he was waived before March 1, will be playoff-eligible for any team he signs with -- with the exception of Golden State. After being traded away by the Warriors in July, Lee is unable to sign with them until next season.

The Mavericks are optimistic about their chances to sign Lee after he clears waivers, sources told ESPN's Tim MacMahon.

Lee posted a picture to Instagram of him with his former Celtics teammates, a snapshot that was taken after Thursday's practice in Utah, where the veteran had begun saying his goodbyes.

Celtics coach Brad Stevens said it's hard for every player to be satisfied on a 15-man roster.

"You want to help all of your guys have tremendous experiences and tremendous success having those experiences, but you can only play five at once," Stevens said. "So, regardless, somebody or multiple people aren't playing much or as much as they want. And that's on every team, that's every year. You try to put in enough time and work, and thoroughly evaluate it, figure out what's best for the team. Sometimes you're right and sometimes you don't find the right formula for a while. So I wish it would have worked out better from a playing time standpoint, but I said he was a good pro, and he's going to have great opportunity wherever he goes now."

Lee appeared in 30 contests for the Celtics this season, and averaged 7.1 points, 4.3 rebounds and 1.8 assists in 15.7 minutes per game over that span. He recorded a season-high 14 points, to go along with one rebound and one assist, in 15 minutes Nov. 18 against the Mavericks.

"Even when you look at his [basic] numbers, his numbers are pretty good," said Stevens, although the advanced metrics hammered home how much better the Celtics were when Lee wasn't on the court. "It was one of those situations where we had a logjam at that spot, and that spot became even tighter because we decided to play small more. So it was more of a style of play decision than anything else.

"And it stinks because we knew this going in that a good, productive player would be sitting. And it became more than one. Tyler [Zeller] spent a lot of time not playing this year, and Tyler's a heck of a player. It's just the way that our team dynamics worked. So we're very hopeful for [Lee] that he finds a great spot and that he does really well."

The 6-foot-9 forward/center was acquired by the Celtics on July 27, and he owns career averages of 14.4 points, 9.2 rebounds and 2.3 assists over 725 regular-season games.

Information from ESPN's Chris Forsberg was used in this report.