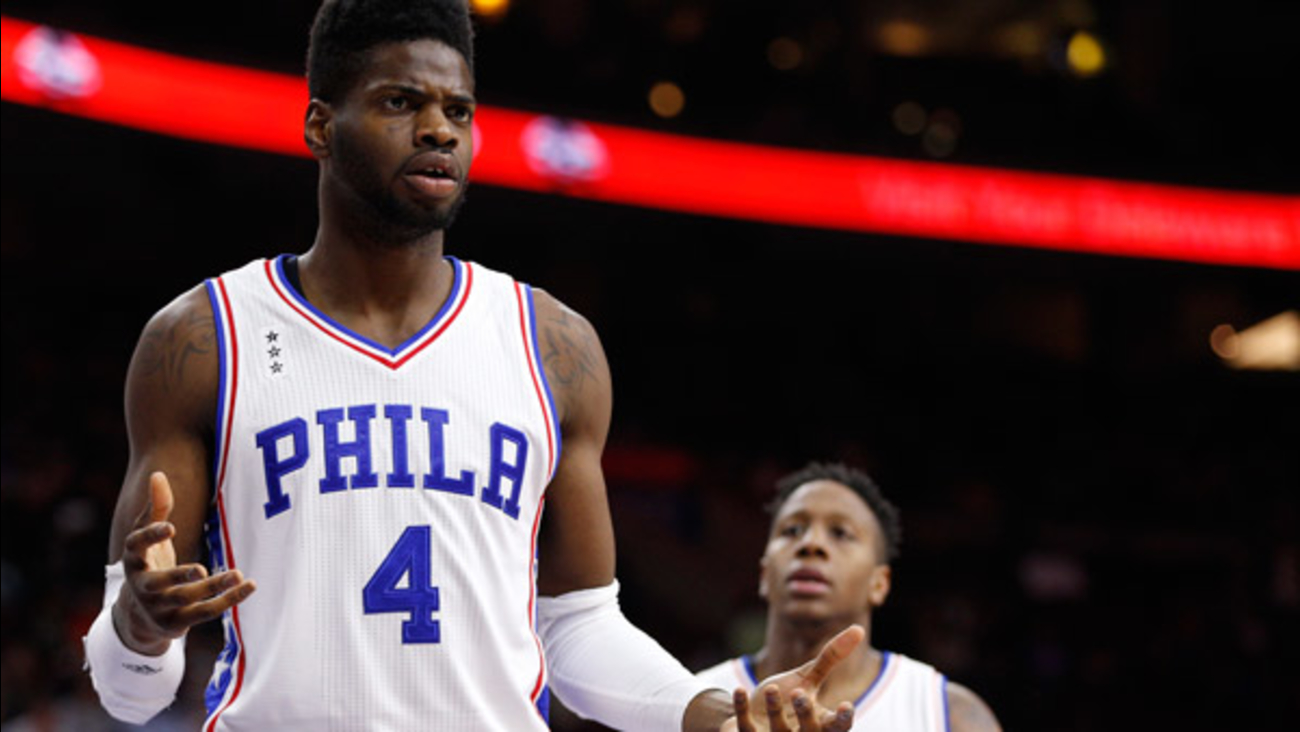 Philadelphia 76ers' Nerlens Noel reacts to the call on the court against the Sixers during the second half of an NBA basketball game against the San Antonio Spurs, Monday, Dec. 7. (AP Photo/Chris Szagola)

PHILADELPHIA -- With new front office executive Jerry Colangelo sitting courtside, the Philadelphia 76ers showed him just how far away they are from becoming a competitive franchise.

Tim Duncan, Manu Ginobili and Kawhi Leonard all sat out and the San Antonio Spurs still rolled past the Sixers, 119-68 on Monday night.

Coach Gregg Popovich rested Duncan and Ginoboli against the hapless Sixers and Leonard was ill.

It's hard to imagine it would have been much worse for the Sixers had the trio played.

The Sixers fell to 1-21 hours after Colangelo was named Philadelphia's chairman of basketball operations. Colangelo, the chairman of USA Basketball, would also serve as an adviser to team ownership.

He had a front-row seat for the mess of a roster team president Sam Hinkie assembled over three seasons that rank among the worst in any era in professional sports.

There are no quick fixes in Philadelphia.

Robert Covington, Nik Stauskas and Nerlens Noel each scored 13 points for the Sixers. Jahlil Okafor, back from a two-game suspension for his role in a Boston street fight, scored 10 points. Coach Brett Brown, a longtime Popovich assistant in San Antonio, brought Okafor off the bench because of an illness.

The Spurs led by 44 points at the end of three quarters and hit the 100-point mark with 10 minutes left in the game.

The Spurs just milled around the court during timeouts in the fourth quarter, nothing really to say with the game so far out of reach. Aldridge, Tony Parker, Danny Green, Kyle Anderson and Matt Bonner all started for the Spurs. Anderson failed to score in the first quarter and the Spurs still led 33-17.

The highlight came in the fourth quarter when San Antonio's deep, deep sub Boban Marjanovic received rousing ovations with each basket. He hit a jumper in the final minute that brought the crowd to their feet, and fans - of both teams - chanted his name as he sprinted off the court.

Marjanovic scored 18 points on 8 of 10 shooting, well above his career high of six points set against Brooklyn in October.

76ers: Allen Iverson attended the game and received a huge ovation when he was introduced on the big screen. ... Okafor had 21 points and 12 rebounds against the Spurs on Nov. 14. ...

Spurs: At Toronto on Wednesday night.