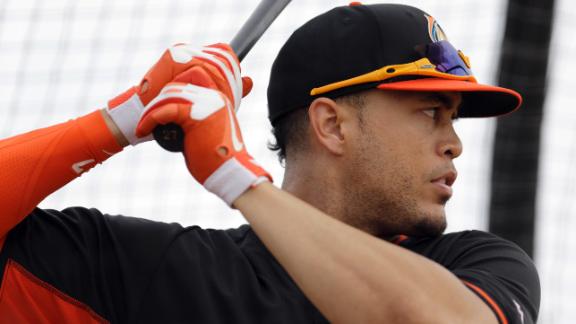 Giancarlo Stanton typically makes a lot of noise with his bat. On Thursday he made some with his batting helmet.

Stanton, a Miami Marlins outfielder and the reigning National League home run champion, had his 2014 season come to an abrupt end this past Sept. 11 when he was beaned in the face by a pitch from Brewers starter Mike Fiers. The Marlins already had announced that he'd be wearing a face mask attachment on his batting helmet this spring, but nobody expected the type of mask that was unveiled Thursday.

Stanton's mask, prepared by football helmet manufacturer Schutt, is made of carbon fiber and features a stylized "G" -- his first initial:

Stanton, who on Thursday saw his first live pitches since his beaning back in September, believes the design provides better visibility.

"I wasn't fond of that [old design] across my face the whole time,'' he said.

"It's just what I envisioned when thinking about it,'' said Stanton, who signed a 13-year, $325 million contract during the offseason.

Most MLB mask attachments in recent years have simply been plastic extensions, such as the one Jason Heyward began wearing in 2013. But several MLB players, includingEllis Valentine and Dave Parker, wore football-style face masks back in the 1970s. Stanton's mask is a bit of a throwback to those designs, although Valentine's and Parker's masks weren't personalized.

It remains to be seen whether Stanton will wear his mask in the regular season or it will just be for spring training, but on Thursday he wore a traditional-style batting helmet when he tracked his first live pitches since his beaning.

He expects to wear his newly designed helmet, which was set to arrive later Thursday, the next time he faces live pitching.

In tests, the face guard withstood fastballs clocked between 85-100 mph, denting but not breaking. Stanton noted that traditional guards dent when stuck by balls traveling at that speed, too.

The mask design was first reported by the Miami Herald.

The 25-year-old said he didn't experience any anxiety stepping into the batter's box for the first time since the Fiers fastball broke his orbital bone and damaged five teeth in September.

"It was just like any other spring training," he said. "I wanted to minimize any expectations on either side. I didn't think that I would have any thoughts about [the injury] and I didn't."

Stanton did take his turn in the cage during coach-pitch batting practice, spraying the ball around the field but never letting loose with the ferocity that produced a National League-high 37 home runs last season. That didn't seem to bother the throng of fans who descended on the young superstar like moths to a light as he walked from field to field, or the MLB production crew that followed him around the complex all day for an upcoming feature.

Marlins Striving For A Championship
Marlins outfielder Giancarlo Stanton and second baseman Dee Gordon discuss expectations for this season and Stanton talks about stepping into the batter's box after last year's season-ending beaning.