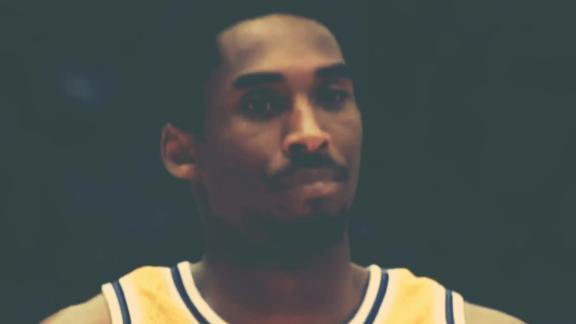 Kobe Bryant not only set a points record for a player of his age in his final NBA gameWednesday night -- he also helped the Staples Center and the Los Angeles Lakers break industry merchandise records.

The previous record, Ryan said, was set by Led Zeppelin, who sold $1 million worth of merchandise in London at the O2 Arena on Dec. 10, 2007, the group's first full-length concert in three decades.

The high-end Kobe memorabilia, dubbed the "24 Collection," was a partnership between AEG; Kobe's company, Kobe Inc.; his merchandise partner, MainGate; and the Lakers.

"The 24 Collection started with a vision of gold and diamonds and how this translated with the fans of Los Angeles," Ryan said. "We wanted every person who purchased with us the opportunity to have a piece which was special for the moment. The support and buy-in exceeded our expectations."

The average fan inside the arena spent $61 on merchandise alone, with the average bill being $230, Ryan said.

When asked for his response to his merchandise on the final night of his 20-year career, Bryant laughed.

"It says that fans are really appreciative of this moment and wanted to maybe have something they can remember," Bryant said.

Prices of the merchandise were certainly for the well-heeled. Most of the hats, more than 60 percent of which sold out, cost $72.48 each.

By the end of the night, Ryan said all pins, coins and jerseys had been sold out. All snakeskin-texture jerseys that retailed for $424 each and a limited-edition version of the jersey, with only 248 made, sold for $824 each.

One ticket holder walked into the crowded main team store about an hour before tipoff and purchased 20 of the $824 jerseys, which come in a commemorative box.

Ryan said that it's likely those jerseys now have a higher resale value, but his company set the market by selling a jersey at that price.

Of the 24 leather jackets with Swarovski crystals on it that retailed for $5,824, only three remained at night's end. Ryan said Bryant was gifted the 24/24 jacket, while his wife, Vanessa, got 8/24.

Including online sales, AEG, Bryant, the Lakers and MainGate sold more than $2 million in merchandise on Thursday, with the arena portion being the most significant because sales don't have to be shared with the rest of the teams in the league.

Merchandise records were set despite plenty of giveaways. Each person with a ticket at Wednesday's game got a Kobe ticket holder with a lanyard, a commemorative book and a Nike T-shirt. Courtside ticket holders got six different shirts and a hat, and 20 ticket holders were gifted limited-edition Kobe shoes with Wednesday's date on it.

Merchandise wasn't restricted to the arena. Bryant ended his postgame speech with the words "Mamba Out." Minutes later, "Mamba Out" T-shirts, in three colors, were being offered on his official website for $25 each.

Ticket stubs will also be a hot item in the coming days. Bidding on stubs on eBay have surpassed $100 each in many auctions.