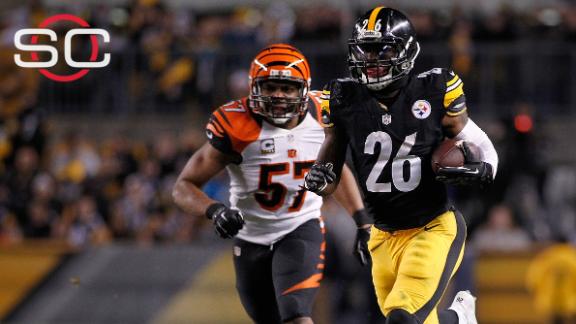 The All-Pro receiver offered a big-picture perspective on why he's not holding out despite having three years left on a six-year, $43 million deal. That money puts him outside the top-10 among wide receivers in annual payout, fueling offseason speculation that he wanted to leverage a new deal after a league-high 3,197 yards the last two years.

"Holdouts never go well. Just look at history. It always ends badly," Brown said Saturday. "It wouldn't be the best decision. I make a lot of money. I pull up to camp in Rolls-Royces."

That he did, showing up to Saint Vincent College on Saturday afternoon in a Steelers-inspired, black-and-yellow Phantom driven by his brother.

Brown missed a voluntary work session in April, and at that time, a Fox Sports report surfaced that he wanted a new deal. Brown later clarified that he missed the session for the birth of his child and had no intention of holding out.

Brown, a sixth-round pick in 2010, points out the Steelers offered that six-year deal after Brown played two years in the league, one year before his rookie deal expired. They didn't have to do that.

Brown turned 27 this month, and with the Steelers' trend of signing key players with one year left on their current deals, as they did with quarterback Ben Roethlisberger's $100 million extension, Brown will be 28 or 29, still in his prime, if he re-ups with Pittsburgh. By then, he can shatter the five-year, $70 million deals high-profile receivers Demaryius Thomas and Dez Bryant landed this offseason.

Brown plans to stay elite -- and then some -- during that time. His 33 straight games with at least five catches and at least 50 yards is an NFL record.

"What I'm here to do today is show how hard I've been working, showcase that I can still be the best in the world and help my team win football games," Brown said.