Steph Curry might be the grittiest player in the NBA 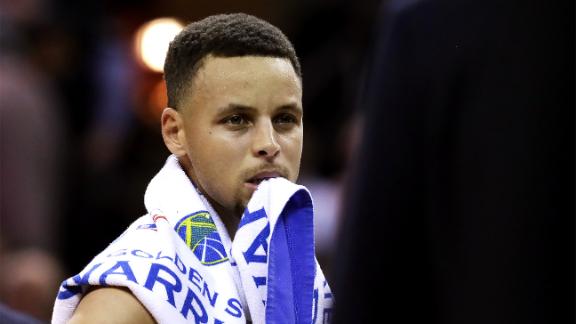 When you think of grit in the NBA, you probably think of big men setting hard screens and battling for position in the paint, or players hitting the ground to secure a loose ball.

"A lot of times it's being ugly, not pretty," Portland Trail Blazers coach Terry Stotts says.

You probably don't think of two-time reigning MVP Stephen Curry making 3-pointers for the Golden State Warriors. But based on the research University of Pennsylvania professor Angela Duckworth has done on the topic, maybe you should.

"I think the word 'grit' sounds like when you grit your teeth," Duckworth says. "I think it's less about that than the day-in, day-out dedication and resilience.

"If you look at Steph Curry's career, there were lots of times where you could have counted yourself out. Weak ankles. Who's going to be the best player in the league on 3-point shots? There's nobody in the league I can think of that's grittier than him."

A former consultant for McKinsey & Company, Duckworth became intrigued by the notion of grit when she was working as a math and science teacher and trying to figure out why talented students didn't always succeed and seemingly less-talented kids sometimes did.

Duckworth's answer, eventually arrived at while working toward a graduate degree in psychology, was grit. Her version of the term, summarized in her recent New York Times bestseller "Grit: The Power of Passion and Perseverance," isn't quite the same as the one used traditionally in sports. Instead, Duckworth defines grit as "passion and perseverance for long-term goals."

The concept gained scientific rigor when Duckworth tested West Point cadets using the "grit scale" she created. Despite not having a relationship with academic achievement in high school or SAT performance, grit proved a better predictor of which cadets would drop out of grueling basic training.

The definition translates well to sports, where all athletes are going to have to persevere through setbacks at some point in their careers because of their passion to compete.

"I do think that sometimes the narrative with athletes is we want this linear [progression]," says Redick, who read Duckworth's book during training camp. "It doesn't always work that way -- and not only on the outside and kind of what the public sees and the media talks about, but the internal battles that every athlete faces. There are obstacles and maybe even moments of self-doubt."

It's little surprise, then, that Duckworth hears regularly from coaches interested in how they can use her research. While the concepts of hard work, dedication and resilience that are encapsulated in Duckworth's version of grit are nothing new for coaches, her research into how grit translates in other fields of high achievement, how to measure it and how to build it provide helpful coaching tools.

"She gave a greater clarity to the word 'grit' for me," says Philadelphia 76ers coach Brett Brown, who invited Duckworth to speak to his young team. "I think that through her examples of what her version of grit was, it resonated with me more clearly.

"Both of my parents are schoolteachers, and her examples of different practices in different school systems and the different economic situations relative to some of her areas that displayed the most grit -- and the people who were able to overcome different socioeconomic barriers or boundaries or obstacles and still persevere -- that interested me a lot, as well as the coaching side of it."

Brad Stevens of the Boston Celticsis one of a handful of coaches, including Pete Carroll of the NFL's Seattle Seahawks, who have built more lasting relationships with Duckworth. She spoke to the Celtics last season before a game in Philadelphia, and Stevens' endorsement appears on the back of her book, alongside those of authors such as Malcolm Gladwell.

One of the aspects Stevens likes about grit is that it can apply equally to a player or team that has experienced success and one that has dealt with adversity.

"I learned it at Butler when we went to the national championship twice. Obviously we were hurt because we didn't win it all, but a lot of people treated us like we had. It was fun to watch those kids just move on to what's next and try to do it again and try to be a little bit better next time and not rest on what was already achieved. I think that's a big part of mindset or grit, just as recovering from a tough day is."

That sounds a lot like an MVP and champion coming back even better the next season.

Television writer and producer Michael Schur, the co-creator of "Parks and Recreation" and the creator of new NBC sitcom "The Good Place," has spent enough time thinking about grit that he calls it "one of my favorite topics."

Under the pseudonym Ken Tremendous, Schur wrote about baseball -- and more specifically about writing about baseball -- on the influential blog Fire Joe Morgan. One of the blog's favorite hobby horses was how writers lionized the grit of white players who had average or poor statistics, like former St. Louis Cardinals shortstop David Eckstein. (Later, Schur paid tribute to this relationship by giving a law office on the show "Parks and Recreation" the name "Fwar, Dips, Winshares, Gritt, Babip, Pecota, Vorp & Eckstein.")

"'Grit' is a catch-all term for any baseball action writers deem 'hard-nosed,' or physical, or dogged," Schur observed in an email. "Grit is crashing into walls, sliding hard, hustling on an infield grounder, diving for a line drive. Grit is Aaron Rowand breaking his nose on the wall, or Dustin Pedroia's always-dirty uniform, or Paul O'Neill smashing a water cooler after a strikeout. Which reminds me -- grit is also nearly always a term used to describe white players."

In the NBA, there may not always be the same element of racial coding. After all, African-American Tony Allen coined the "grit 'n' grind" moniker that has come to define the Grizzlies' run of contention in the Western Conference, as well as their relationship with a diverse Memphis fan base. Still, even "grit 'n' grind" reinforces the notion that grit is the domain of less-talented athletes.

In the common usage, players can be either talented or gritty. By Duckworth's definition, players can -- and should -- have both traits.

"One thing that surprised me when I started doing this research," she says, "is if you're really talented, why aren't you the hardest-working, longest-trying player? Because rationally speaking, you're getting so much out of every moment on the court. You should be the one! Why wouldn't you be the one to show up early and stay late because every moment you're there, you're getting this huge return?

"I've wondered whether it's partly because to pass some threshold of good enough, you can kind of trade off talent with grit. If you're trying to get to a threshold, you can be talented or gritty. I think one of the things about the players that I most admire is there's no ceiling on what they want to do.

"I don't know that Steph Curry goes to bed and says, 'I've reached it.' [If I'm Curry] I just want to continually get better. If that's true, rationally, analytically, then you don't trade them off against each other. You just try to maximize both."

"I think Steph is gritty," Redick concurs. "I would put him in that category. As many superlatives as you can talk about with him, he's definitely gritty."

Curry's progression demonstrates how he has epitomized grit in multiple ways. As a prep player, he had to ignore doubts about his ability to overcome a small frame to be a contributor in college -- famously not getting a scholarship offer from an ACC school -- let alone in the NBA. Having established himself as an NBA player, Curry subsequently had to deal with the setback of recurrent ankle injuries, resulting in surgery that limited him to 26 games during the lockout-shortened 2011-12 season.

All the while, Curry kept improving his shooting, ballhandling, finishing and defense. As I noted during the 2016 NBA Finals, Curry has developed more late in his careerthan any other superstar in league history.

Even after he'd reached the pinnacle as a champion and MVP during the 2014-15 season, Curry came back better in 2015-16. Last year was Curry's sixth consecutive season of improving his win shares per 48 minutes, according to Basketball-Reference.com, tied with role players Jay Humphries, Thabo Sefolosha and Sedale Threatt for the longest streak ever to start a career.

"I think what makes you special, Steph, is obviously you've got a lot of God-given talent, but it's the determination, it's the love for the game," Kerr said. "There is no agenda, and every day you come in and you work."

Later in the media conference, Curry's advice to kids hoping to learn from him sounded a lot like Duckworth's definition of grit.

"Find what you're passionate about in this life," Curry advised. "Everybody's given a certain skill set, a certain talent, a certain passion. To hold on to that and work as hard as you can to being the best that you can at what you feel like your place in this world is and what your role is.

"I don't think it's as simple as that, but it's something that you can hold on to. Find what you're passionate about in this life and just work at it."