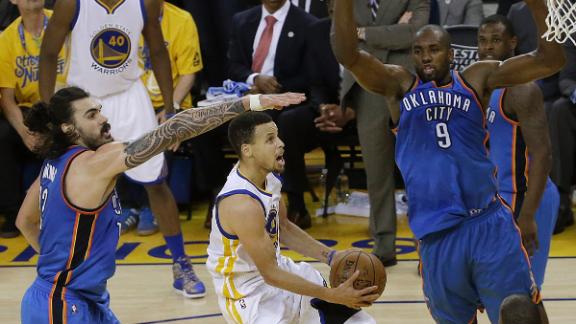 OAKLAND, Calif. -- Stephen Curry became the target Thursday night for the second time during the Western Conference finals of what could be perceived as a slight from Russell Westbrook in the Oklahoma City Thunder guard's postgame news conference.

Kevin Durant took the question with Westbrook laughing and covering his face after they were asked whether the two-time MVP was an underrated defender.

But Durant wasn't offering a diplomatic answer, either.

"He's pretty good, but he doesn't guard the other best point guards," Durant said after Curry had five steals in the Golden State Warriors' series-extending 120-111 Game 5 victory over the Thunder. "I think they do a good job of putting a couple of guys on Russell from[Klay] Thompson to [Andre] Iguodala, and Steph, they throw him in there sometimes. He moves his feet pretty well. He's good with his hands.

"But, you know, I like our matchup with him guarding Russ."

Westbrook has averaged 28 points and 11 assists per game in the Western Conference finals, although he is shooting only 41.3 percent from the field and has committed 4.6 turnovers per game during the series. He had 31 points on 11-of-28 shooting with eight assists and seven turnovers in the Thunder's Game 5 loss.

According to ESPN Stats & Information, Westbrook is 8-of-25 from the field and has committed seven turnovers with Curry as his primary defender in this series. Curry has contested 20 of the 25 shot attempts.

Asked about Curry before Game 1, Westbrook said: "He's a shooter. He's not nothing I haven't seen."

Curry, who led the NBA with 2.14 steals per game this season, acknowledged that Thompson typically draws the tougher defensive assignment when asked about Durant's comments.

"I've got a great teammate that's obviously a better defender on the perimeter," said Curry, who received 13 points in voting for the league's all-defensive team, including three first-place votes. "I like the challenge, and I'll do my job the best I can. That's what I'm out there to do. In those situations, I don't get too caught up in a one-on-one matchup.

"My job is to follow the game plan. I've done that the last four years of my career, trying to elevate my defensive presence. I do my job."