Stephen Curry sprains knee in Game 4, will have MRI on Monday 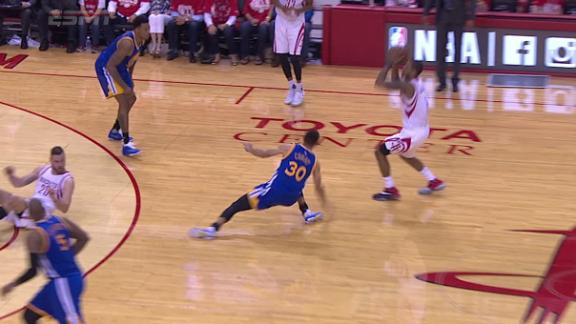 HOUSTON -- Stephen Curry, who returned to action Sunday after missing the past two games because of a sprained right ankle, will undergo an MRI on Monday after spraining his knee midway throughGolden State's 121-94, Game 4 win over theHouston Rockets.

Curry slipped while guarding Trevor Ariza at the first-half buzzer and banged his right knee on the floor. The reigning league MVP grabbed the knee and limped off to the locker room.

Curry returned to the court after halftime and moved laterally to test the joint, but he stopped and shook his head toward the bench. Shortly thereafter, he headed back to the locker room and was ruled out just after the second half began, with Shaun Livingston taking his spot in the lineup.

"He was standing there crying, you know, and like, 'Dog, just get out of here. We'll hold you down,'" Warriors forward Draymond Green told ESPN Radio's Kevin Calabro and Jon Barry after the game. "We gotta support him, you know, and be there for him. I mean, he came out and obviously gave it a go, wasn't 100 percent, and he gave it a go, and it's unfortunate that that happened.

"But at the end of the day, one thing we've always talked about is our depth, and we've gotta use that to win games, and so we used that tonight."

Added teammate Klay Thompson: "We knew as soon as Steph went down we were going to have to do it ourselves. The ball was swinging around, Draymond got hot, I made a couple, and the floor opened up, and we were just patient and having good shots. That's why we were successful."

Curry had six points on 2-of-9 shooting, including 1-of-7 from behind the 3-point line.

He appeared to slip on a wet spot, started when Houston's Donatas Motiejunas slid across the court for a few yards near the 3-point circle.

"His conditioning was better than I expected," Golden State coach Steve Kerr said. "And then he slips on the wet spot, unfortunately, and back to square one. We'll see what happens with the MRI tomorrow."

Asked about pundits' picking against the Warriors without Curry, Green told ESPN Radio, "If Steph Curry's out, I'd probably write us off too. That's human nature [because] the guy's the MVP of the league, but we've got a team full of competitors.

"We're not gonna bow down or lay down against anyone. We're gonna continue to play our game, continue to try to win basketball games, no matter who's out there."

Green said the same of the Rockets, citing last season's Western Conference semifinals between Houston and theLos Angeles Clippers. The Clippers led that series 3-1 before the Rockets rallied with three straight wins to advance.

The Rockets had their own issues at point guard. Patrick Beverley strained his right leg, and the team announced before the start of the second half that he would not return.

Curry leaves Game 4 with right knee sprain
Steph Curry slips on a wet spot and suffers a right knee sprain just before the halftime buzzer. He tests out his knee at halftime but hobbles back to the locker room and does not return to the game.
Related topics:
sportsespngolden state warriorsstephen currymrihouston rocketsknee sprainnba playoffsnbaanklewestern conferencesteve kerr
Copyright © 2020 ESPN Internet Ventures. All rights reserved.
More Videos
From CNN Newsource affiliates
TOP STORIES