Stephen Strasburg not available if Nationals advance to NLCS 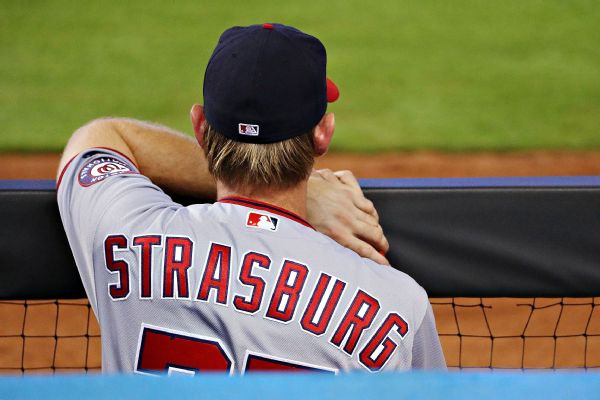 WASHINGTON -- Stephen Strasburg will not be available for the National League Championship Series.

"We know he's not going to be ready for the next series," said Washington Nationals manager Dusty Baker before Game 5 of the National League Division Series.

Baker's team is tied 2-2 with the Los Angeles Dodgers, with the winner of Thursday's game facing the Chicago Cubs in the NLCS starting on Saturday.

Last Thursday at Nationals Park, the 28-year old right-hander threw his first bullpen session since the injury. Prior to Thursday, Strasburg -- who hasn't pitched in a game since going on the disabled list Sept. 7 with a strained flexor mass -- had not yet been ruled out for a potential League Championship Series.

He threw a second bullpen session on Monday at Dodger Stadium, but stopped earlier than planned after experiencing discomfort in his right arm.

On Tuesday, Baker called the discomfort "no thing" and said that Strasburg would continue his throwing program. Later that day, two hours before Game 4, Strasburg threw off flat ground in the outfield.

"He's progressing as well as we'd like," Baker said Thursday. "It's never as fast you'd like, but again, he won't be available for the next series. It would be a miracle if he was."

This is not the first time Strasburg has missed playoff action. In 2012, when the Nationals won their first division title, Strasburg was shut down in early September due to concerns about his health in the wake of his 2010 Tommy John surgery.

The top overall pick in 2009, Strasburg participated in Washington's second postseason appearance in 2014. He took the loss in Game 1 of the NLDS against the San Francisco Giants.