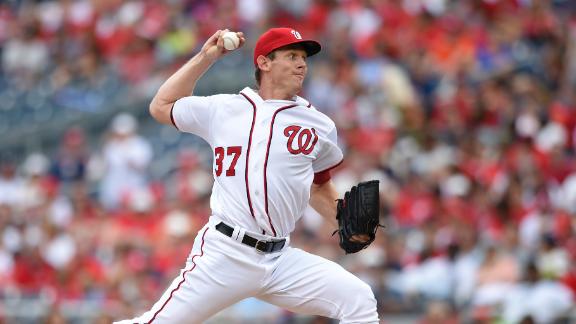 Washington Nationals starting pitcherStephen Strasburg returned from the disabled list Sunday and held theCincinnati Redshitless for 6 2/3 innings before he was removed from the game after throwing 109 pitches.

Strasburg struck out five batters and walked four in Washington's12-1 win over the Reds at Nationals Park.

The Nationals' no-hit bid ended in the eighth inning, when reliever Matt Belisle gave up a single to Ramon Cabrera.

"It's tough taking a guy out of a no-hitter, but we have to think about the future and where he had come from off the DL,'' Nationals manager Dusty Baker said. "You just think, 'We're going to need him.'''

Strasburg (11-0) has won a franchise-record 14 straight decisions and is the first NL starter to begin a season 11-0 since San Diego's Andy Hawkins in 1985. He did not disagree with Baker's decision to remove him.

"I understand where he's coming from,'' Strasburg said. "There's more important things, hopefully, down the road for this team.''

Strasburg was just five pitches shy of his highest pitch count this season. He left to a standing ovation from the crowd of 37,328 and was replaced byBlake Treinen,who gotBilly Hamiltonto ground out.

"I felt pretty good,'' Strasburg said. "It was weird, warming up. My changeup was the only pitch I could really locate, and then I couldn't find the strike zone with it today, but the curveball and slider were really good.''

The Nationals placed right-handerJoe Ross on the disabled list with right shoulder inflammation to open a roster spot when Strasburg was activated Sunday.

Ross, 23, labored through 5 1/3 innings against Cincinnati on Saturday, allowing a season-high 10 hits and four earned runs. Ross' velocity was noticeably down.

Strasburg hadn't started since June 15 after he suffered an upper-back strain. The Nationals scratched him from two starts before making the DL move June 26 and backdating it to June 16.

Strasburg, who signed a seven-year, $175 million contract extension in May, lowered his season ERA to 2.71 with Sunday's performance.

Moving Ross (7-4, 3.47 ERA) to the DL also means rookieLucas Giolitowill remain in the rotation. The 21-year-old threwfour scoreless innings in his debut June 28 against the New York Mets.