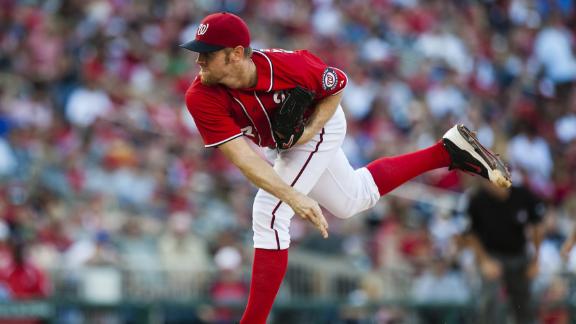 WASHINGTON -- Stephen Strasburg's postseason debut will come in Game 1 of the NL Division Series on Friday when he takes the mound at home for the Nationals against the San Francisco Giants.

The announcement by Washington manager Matt Williams on Thursday was no surprise: Strasburg was the team's opening day starter and he's been much better at home than away.

In 18 starts at Nationals Park this season, Strasburg went 9-3 with a 2.56 ERA. In 16 road starts, he was 5-8 with a 3.82 ERA. Still, one of the right-hander's worst showings came at home against San Francisco. On Aug. 24, the last time the teams met, Strasburg left after only four innings, having allowed five runs.

Strasburg was held out of the 2012 playoffs by the Nationals to protect his surgically repaired right elbow.

Williams would not say who his starter would be if there is a Game 4, although it is expected to be Gio Gonzalez.