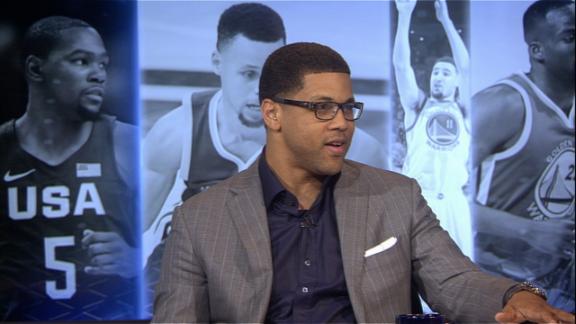 Golden State Warriors coach Steve Kerr says it's "absurd" to cast Kevin Durant as a villain because he left the Oklahoma City Thunder as a free agent and joined the Warriors this summer.

"To think of Kevin Durant or Steph Curry or any of our guys as villains, it's kind of absurd. Especially Kevin," Kerr said Sunday in an interview on ESPN Radio's TMI with Michelle Beadle and Ramona Shelburne. "This is one of the most likeable people in this league. He's just an awesome human being. What he did in Oklahoma City was just amazing for that community.

Kerr added: "Circumstances kind of dictate, I guess, that some people are going to see him as a villain. But it's only because he decided to go elsewhere to play. He wanted to change his scenery, he wanted a new challenge. More than anything he wanted to play with our guys. He loves Draymond [Green] and Steph and Klay [Thompson] and Andre [Iguodala]. Seeing those guys in New York, he loved seeing the chemistry that exists and he wanted to be a part of it."

Durant said last month that he didn't leave the house he'd rented in the Hamptons for 48 hours after he announced his decision because he knew how strongly fans would react to him leaving.

"For a few days after, I didn't leave my bed, because I was like, 'If I walk outside somebody might just hit me with their car, or say anything negative to me,'" Durant said last month at Team USA training camp in Las Vegas.

"I mean, I've been somewhere for so long, and then to make a change like that, [which] nobody knew was coming, that nobody didn't think I would do, of course I didn't know how it would be received afterward. But at some point, I just said, 'Look, man, life goes on. Life moves on, and I can't hide forever,' so I just had to face it."

Durant was warmly received by his new home crowd up at Oracle Arena last month when Team USA played an exhibition game against China, but he was booed at Staples Center before Team USA's exhibition game in Los Angeles a few days earlier. Fans in Oklahoma City notoriously burned Durant's jersey after he decided to sign with the Warriors.

Barkley, of course, was part of a super team himself during his NBA career when he was traded to the Houston Rockets in 1996 after he said he'd retire if the Phoenix Suns didn't trade him to a contender.

"People are going to view him however they want," Kerr said Sunday. "But we all know what kind of person he is and what kind of impact he's had around the league."

Kerr was also asked about the recent series of mishaps his All Star forward Draymond Green has gone through this summer. Green had to pay $560 for a noise violation in a plea deal to settle a misdemeanor assault-and-battery charge in East Lansing, Michigan. Then last week he accidentally posted a lewd picture of himself on the social media application, Snapchat.

Kerr said both he and Warriors general manager Bob Myers have been in touch with Green throughout the summer.

"With Draymond he's obviously the one guy that sort of walks the line, tows the line, he's had some issues during the season, whether it's being demonstrative on the floor or the lockeroom or whatever, or getting suspended," Kerr said Sunday. "But the thing with Draymond, and I learned this from Tom Izzo... He said 'Draymond is going to make you pull your hair out sometimes but he's such a great guy and a team guy and he's got such a huge heart that he's always going to come back around. He said, 'The big thing with Draymond is challenge him and be up front with him. Don't be afraid to yell at him' That's the way we've kind of approached it.

"Draymond and I, we've gotten into it many times ... but there's never any lingering ill will. Bob and I try to keep the momentum going. Every once in a while there's a hiccup and we address it... but he always gets back on track."