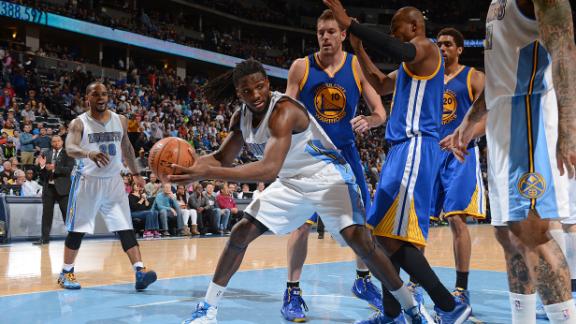 OAKLAND, Calif. -- Steve Kerr took time to email back three disappointed fans who were upset the Golden State coach rested his regulars Friday night at Denver before battering the Knicks 125-94 on Saturday night.

One of the emails Kerr received was from a family that drove from South Dakota to the Mile High City with high hopes of seeing All-Stars Stephen Curry and Klay Thompson lead the Western Conference's top team. Instead, those two rested along with center Andrew Bogut and Andre Iguodala.

Kerr also received a "couple of catcalls, a couple boos during the introductions" from the stands. He hadn't heard anything from the league about his decision Saturday, when Golden State played its fifth game in seven days, with two of those having been away.

"I heard from some fans. I received a few emails, stories about driving in from a long distance off and spending a lot of money on tickets," Kerr said. "I have great sympathy for those people. I really do. It's a tricky one. It's something that I think Adam Silver is trying to address through the scheduling shuffling that he's talking about.

Kerr still would prefer to start the season 10-12 days early around Oct. 20, cutting down on the eight preseason games and month of training camp. He also noted that in every other sport, players get days off.

Golden State had its five-game winning streak snapped in the 114-103 loss to the Nuggets, then returned home to begin a six-game stretch at Oracle Arena. Even Denver heard from angry fans on Twitter, such as one father who rented a suite for his son's birthday because the boy loved Curry & Co. By the second half, he had turned his attention to cheering for the Nuggets.

Kerr -- who noted the rest was as much mental as physical -- made a point to respond to the fans via email, and one who received a nice note got back in touch with the Warriors to let them know how surprised and appreciative he was to hear from the first-year coach.

Bogut understands that kids might have one chance -- one ticket all season -- to see an NBA game live, and that they'd want to see the best matchups.

But Kerr is preparing his team to be fresh come playoff time for what the franchise hopes is a deep run.

"It's tough, if I was a kid and had one ticket to go to and guys rested," Bogut said. "It's just a part of the grueling NBA season. It's unfortunate for the fans who were a little [ticked] off by it, but we have aspirations to go deep in the playoffs and to get to the end, we have to do what's best for our side."