Steve Kerr says Steph Curry's struggles not due to any injury 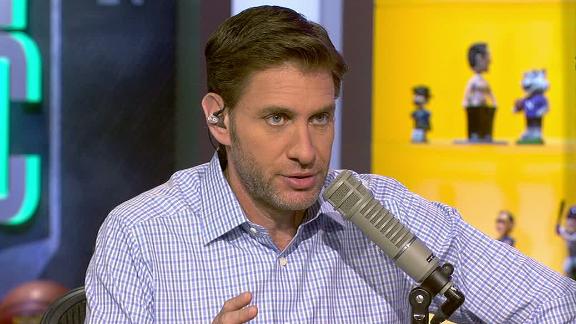 OAKLAND, Calif. -- The growing search to find reasons forStephen Curry's two-game slump wound its way back to the BayArea on Wednesday, andGolden State Warriorscoach Steve Kerr once again said Curry's right knee is not the culprit.

Curry's poor play over the past two games (7-of-17 shooting in Game 3, 6-of-20 with six turnovers in Game 4, a combined 5-for-21 on 3s) is so unexpected that it spawned speculation that he is seriously diminished by the sprained MCL he suffered in Game 4 of the opening-round series against the Houston Rockets. The Warriors have lost two games in a row for the first time all season and face a 3-1 deficit to the Oklahoma City Thunder in the Western Conference finals.

Kerr dismissed a Yahoo! Sports report that quoted a non-Warriors source as saying Curry is playing at 70 percent. "Is that 'sources with knowledge of the team's thinking?' " Kerr asked Wednesday afternoon. "Nobody has said anything about Steph being 70 percent to me. Training staff, relatives, friends, sources with knowledge of the team's thinking -- nobody has told me he's 70 percent. Evidently they told the media but not me."

With the series in every-other-day mode, with travel on the off days, there is little time for recovery. Kerr acknowledged that Curry has been "not as explosive" over the past two games, and he inched closer to suggesting that Curry's problems are not solely the result of Oklahoma City's disruptive energy and long limbs.

"I know he's not injured -- if he were injured, he would not be playing," Kerr said. "Is he bothered a little bit, perhaps by the layoff when he went three weeks without a game? He may not be quite where he needs to be, but it's not an injury, and that's the important thing."

Curry has appeared unaffected by the knee in several games since he slipped on the floor against Houston -- including a 40-point game in his return in Game 4 against Portland and an efficient 28-point game on 15 shots in the Warriors' Game 2 win over the Thunder -- but he has been noticeably tentative and less dynamic in Games 3 and 4. The Warriors, led by Curry, have resisted every attempt to cite the injury as a factor.

"It's the playoffs, and nobody cares," Kerr said of Curry's knee. "Everybody has issues and injuries."

Curry has been unable to take advantage of switches that left him one-on-one against the bigger and slower Steven Adams and Serge Ibaka, and he has shown a rare inability to navigate drives and finish at the rim. The knee is one possible reason, but Kerr was quick to credit the Thunder for their persistence and execution. And with Klay Thompson in foul trouble in Game 4, Curry was forced to track the tireless Russell Westbrook more than Kerr would have liked.

"They've had a lot of frustration over the years. They're healthy. They're whole. They are determined, and they want what we have," Kerr said. "We have a banner hanging up in here and we take great pride in that. It's a hard thing to accomplish, and they've been close, but they haven't done it, and they're coming after us. They're really getting after it and playing well and competing. We've got to stand up to that."

The Warriors did not practice Wednesday, choosing to use the day to "refresh," Kerr said. No players were available to the media, but Harrison Barnes and Festus Ezeli were on the floor going through shooting drills. Kerr said others -- Curry presumably among them -- were at the facility receiving treatment.

Golden State probably will need a big night from Curry to get back in the series.

"Well, it's a sense of reality staring us in the face. We're down 3-1," Kerr said. "Momentum can shift quickly in the playoffs. We've seen that the last couple years. Let's take care of business at home, get some momentum back and we've got a chance."

All season, the Warriors have taken the best efforts from every opponent. The just haven't shown the vulnerabilities that appeared the past two games in Oklahoma City, where Golden State lost back-to-back games for the first time during its record-setting season.

"It was not festive. It was quiet," Kerr said.

Only nine teams in NBA history have rallied from being down 3-1 to win a postseason series, yet Kerr was quick to note, "I'm guessing most of them weren't the defending champs."

With the season on the line, first-year Oklahoma City coach Billy Donovan says he expects the Warriors to bring their best while back in front of their home fans.

"Again, we have great respect for Golden State. We know how good of a team they are. You've got to get to a place after each game -- what happened in the game, what do we need to get better, what do we do well, what are some changes or adjustments we need to make -- and then you've got to move into the next one," Donovan said.

"I just don't believe that Game 5 is a continuation from Game 4. This is its own separate game, and we're going to have to go now on the road to play in a very difficult environment against a great team."

The Thunder know full well how close they are but also that nothing will be given to them easily. They last reached the NBA Finals in 2012, losing in five games to the Miami Heat.

Oklahoma City stole Game 1 on the Warriors' raucous home floor in Oracle Arena, where Golden State has lost only three times all season.The Thunder are playing with all the poise and passion on both ends, and the Warriors haven't been able to hang around the past two games, in part because of uncharacteristic miscues.

"Every game you have a sense of urgency, it's the playoffs and you know what everybody's playing for. We've just got to come out there and be who we are," Kevin Durant said. "We can't put too much pressure on ourselves. We have to go out, play the game, and play with passion and energy. And we know the whole crowd's going to be against us and we have to stick together even more."