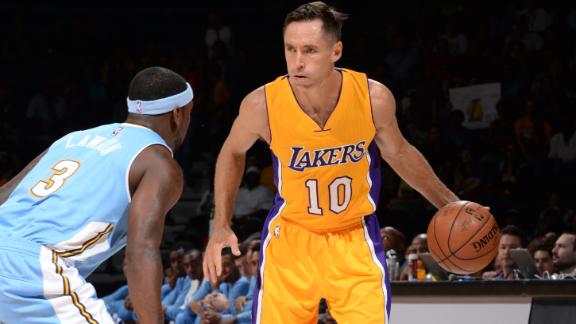 LOS ANGELES -- Steve Nash hoped for one more chance to show off his playmaking skills after fighting injuries and time for two miserable years with the Los Angeles Lakers.

Instead, Nash couldn't even make it to opening night in the 19th season of his remarkable career.

Nash will miss the entire season because of a back injury, the Lakers announced Thursday, putting the two-time NBA MVP point guard's career in doubt.

The Lakers and the 40-year-old Nash announced their joint decision less than a week before the start of the regular season. He played in only 15 games last season with nerve root irritation but hoped for a comeback season after several months of rehabilitation.

The Canadian star played in just three preseason games, feeling more back pain in the second outing. He then strained his back while carrying travel bags several days ago.

"Being on the court this season has been my top priority, and it is disappointing to not be able to do that right now," Nash said. "I work very hard to stay healthy, and unfortunately my recent setback makes performing at full capacity difficult. I will continue to support my team during this period of rest and will focus on my long-term health."

Nash will "focus on rest and rehabilitation," according to the team's news release. He is in the final season of his three-year contract with the Lakers, but the club's announcement made no mention of possible retirement.

Nash has played in only 65 games since the Lakers traded four draft picks for him in 2012 in a spectacularly failed attempt to assemble a title contender built around Kobe Bryant, Dwight Howard, Pau Gasol and Nash.

Bryant, who missed all but six games last season with two major injuries, has played in the same backcourt with Nash for just 48 games.

"As disappointed as we are for ourselves and our fans, we're even more disappointed for Steve," Lakers general manager Mitch Kupchak said. "We know how hard he's worked the last two years to try to get his body right for the rigors of the NBA, and how badly he wants to play, but unfortunately he simply hasn't been able to get there up to this point in time. Steve has been a consummate professional, and we greatly appreciate his efforts."

Nash, the NBA's oldest active player, is due more than $9 million this season. His salary counts toward the Lakers' cap.

If Nash's career ends with his latest injury, it likely won't dull the impact of the greatest player in Canadian history and one of the most complete offensive guards of his generation.

He is third on the NBA's career assists list, trailing only John Stockton and Jason Kidd. Nash also is the most accurate free throw shooter in NBA history, barely edging Mark Price's career mark at 90.4 percent.

During training camp, Nash said he realized the upcoming season likely would be his last. Yet he refused to call it a farewell tour, holding out hope of playing beyond this season if his back held up under the pounding of a full NBA schedule.

Lakers teammate Nick Young took to Twitter to reach out to Nash.

The British Columbia product starred at Santa Clara before starting his NBA career with the Phoenix Suns, who traded him to Dallas in 1998. He established himself as an elite point guard while playing alongside Dirk Nowitzki and Michael Finley with the Mavericks but returned to Phoenix in 2004 for a lucrative free-agent deal.

Nash won two unlikely MVP awards in 2005 and 2006 as the catalyst for one of the most prolific offenses in NBA history under coach Mike D'Antoni. His playmaking and scoring abilities earned him worldwide recognition and eight All-Star Game selections, including his final season with Phoenix in 2011-12.

Nash agreed to join the Lakers for the chance to play for a title living relatively near to his ex-wife and three children. Despite several health struggles late in his career with the Suns, Los Angeles gave him a three-year deal and mortgaged its future by shipping out draft choices.

But Nash's tenure in Los Angeles has been mostly miserable from his second game, when he broke a bone in his left leg and missed the next 24 games.

He also struggled with injuries to his hamstrings and back before last season, when he played in just nine of the Lakers' final 74 games due to recurrent pain in his back and legs.

The Lakers had hoped Nash would be their starting point guard this season, but the club also acquired Jeremy Lin and signed veteran free agent Ronnie Price. Los Angeles, which missed the playoffs last season for just the third time in 38 years, has been projected for a rough season even with a healthy Nash.

Nash Out For Season With Back Injury
Chris Broussard discusses Steve Nash's injury and the impact his absence will have on the Lakers.