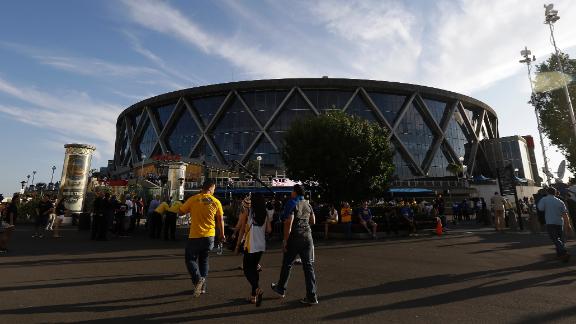 In what could prove to be a landmark case in the sports ticket marketplace, StubHub filed a lawsuit against the Golden State Warriors and Ticketmaster in the northern district of California on Sunday, accusing the two of conspiring to create an illegal resale market by telling season-ticket holders to only resell through their platform.


The suit alleges that the team has informed season-ticket holders should they resell their tickets through anything other than Ticketmaster's exchange, NBATickets.com, they will have their ticket privileges revoked.

The threat has apparently worked. StubHub claims that listings for Warriors tickets, which is currently the hottest ticket in the NBA, are down 80 percent in the past year.


"If the anti-competitive actions complained herein are not stopped, Ticketmaster is likely to seek to replicate them with other teams," the suit said. "As a result, millions of Americans will be held captive to a monopoly secondary ticketing exchange."


The Warriors issued a statement on the lawsuit Tuesday, explaining that Warriors.com and NBATickets.com "are the only sites where tickets are guaranteed to be authentic."


"Currently, more than 10,500 fans are waiting for the opportunity to purchase Warriors season tickets," the statement said. "However, each year a significant number of those tickets are purchased by ticket brokers with the sole intent to resell them at a markup. The Warriors recently decided not to renew 2015-16 season tickets held by some ticket brokers, so that we can instead sell those tickets directly to fans on our wait list.


"This approach reflects our commitment to giving our fans the game experience they deserve."


The Warriors and Ticketmaster have had a relationship since 2012 whereby they share fees from the team's resale market. But sources told ESPN.com that the team became more restrictive and adamant about selling outside of their platform this season, as the Warriors have been one of the best teams in the NBA.


"We're not trying to be the industry pariah, but when actions like these are associated with the business impact that we've seen, and the outcry comes from fans who are saying 'our hands are tied,' we are left with no choice," said StubHub's general counsel, Michelle Fang.


At the heart of the antitrust case, StubHub's legal representatives write, is the fact that the Warriors and Ticketmaster are in control of both the primary and secondary markets.


Besides taking part in what StubHub claims is an illegal restraint of trade at the federal level, the eBay-owned reseller also claims that the setup violates unfair business practices in the state of California, where StubHub, Ticketmaster and the Warriors are all based.


Warriors spokesperson Lisa Goodwin said late Sunday night that it was team policy not to comment on legal matters.


"We are disappointed that StubHub has filed a baseless lawsuit that asks the courts to help prop up its business against true fan-friendly competition," Smith said in the statement. "NBA teams like the Golden State Warriors have implemented ticket exchanges powered by Ticketmaster because they want ticket resale to be a secure experience, not an opportunity for scalping and fraud. The exchanges are growing in popularity because Ticketmaster and its partners have worked hard to make ticket resale much safer and more transparent, uniquely serving true fans.


"Ticketmaster does not force any customer to resell tickets on any particular platform and will vigorously defend these specious charges."


Earlier this month, the Warriors clinched a playoff spot for the third consecutive season, the first time they've accomplished that feat since 1975-77. On Saturday, the team clinched the top spot in the West.


With the favorite for MVP, Stephen Curry, the Warriors have maxed out their season-ticket base at 14,500 seats. The team, which has sold out 118 straight home games, currently has more than 10,000 people on their season-ticket waiting list who have paid $100 nonrefundable deposits to be on the list.