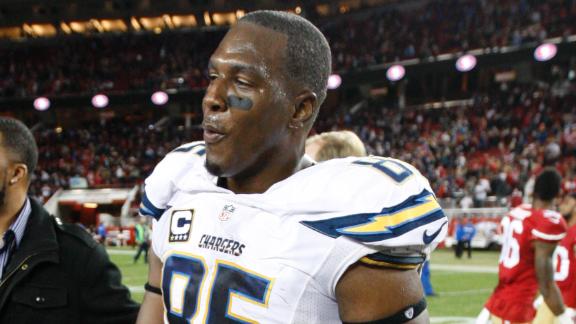 SAN DIEGO -- Antonio Gates told reporters here on Thursday, the opening day of training camp for the San Diego Chargers, that he has no idea how a substance that triggered a positive test for performance-enhancing drugs got into his body.

"When I got the information I was shocked," said Gates, speaking publicly for the first time since the league's announcement that he tested positive earlier this month.

"I knew coming into minicamp (in June) that I was dealing with it. But a four-game suspension was never in my mind."

Gates, an eight-time Pro Bowl tight end, went on to say he had thought it was an issue that would be cleared up when he explained what he took and that ultimately he would not have to miss games because of the positive test.

"They just know it's in your system," Gates said. "It's a barcode. It's a number, and 'boom', they deal with it in black and white. Unfortunately, I wasn't happy with it. But it's the way it is. It's the rules. I've got to deal with it."

Gates, 35, will miss the first four games of the regular season because of the positive test, the first in his 12-year career. He can, however, practice with the team during training camp and play in exhibition games.

Gates can return to the field for San Diego's Week 5 Monday night contest against the Pittsburgh Steelers at Qualcomm Stadium on October 12. Gates said he tested positive for a banned substance related to creating more testosterone in his body.

"Knowingly, or not knowingly, you just can't do it," Gates said. "You can't have it in your system. The support I've received from my teammates, my family and my friends, that has meant the world to me. I'm just ready to play football."

Gates said he will use the positive test to teach his kids and the players around him that nobody's perfect and that people make mistakes.

"As you get older, you have to find a way to take care of yourself in terms of recovery," Gates said. "Unfortunately, certain things that you take in light of trying to do the right thing, in trying to make sure that when you're done playing that you can walk, talk and enjoy your family, is just not NFL approved."

Gates was asked if he had taken a new supplement that was not part of his normal offseason routine.

"I have got to be careful how I answer this because I'm not really sure quite how it got into my system particularly, but it was in there," Gates said. "I've been doing the same things over and over in terms of after the season, just taking care of my body. I'm very intuitive in terms of what my body needs to come out and perform every single year. It's something where it showed up in a test. I've taken multiple tests since then, and it didn't show up. I've taken multiple tests before then, and it didn't show up."

"He's already a phenomenal athlete," Gates said. "He's already an emerging star in this league. And I just try to support him like he's been doing with me during the duration of his time that I've been here."

Chargers quarterback Philip Rivers said Gates will be missed but that the Chargers can use this situation as something positive.

"Certainly, we will miss him," Rivers said. "But I am also confident in the guys we will have those four weeks that we can still play at a high level."