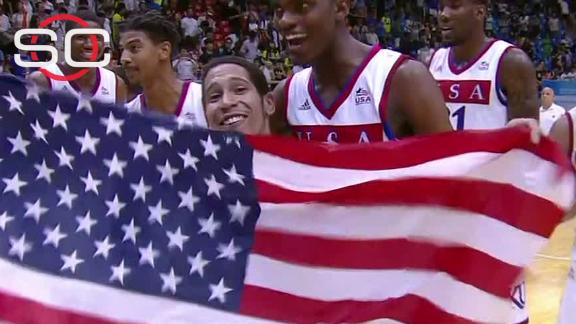 After twice tying the score at the end of regulation and the first overtime, Frank Mason III sparked a 9-0 run in the second overtime as a Kansas-led Team USA beat Germany 84-77 to win the gold medal Monday at the World University Games in Gwangju, South Korea.

It was the first time since 2005 that a men's team from the United States won the gold at the World University Games.

Mason, who finished with 18 points and nine rebounds, hit two free throws with 21.7 seconds remaining in regulation to tie the score at 66. He then made a driving layup in the final seconds of the first overtime period to tie it at 73.

He also was key at the other end of the floor as he made a steal to prevent Germany from winning the game at the end of regulation.

Wayne Selden had 22 points on 6-of-28 shooting to lead Team USA, which was coached by Bill Self and composed of all Jayhawks as well as SMU guard Nic Moore. Perry Ellis added 19 points and 10 rebounds.