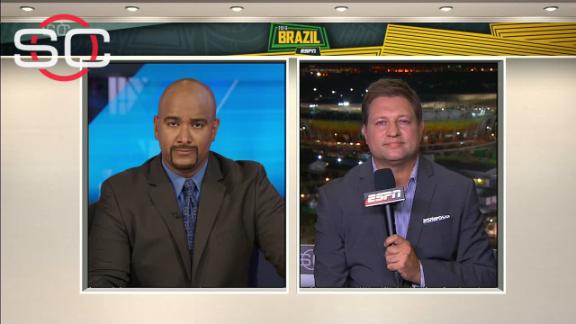 RIO DE JANEIRO -- Team USA will face their old friends from Argentina on Wednesday in the men's basketball quarterfinals at the Rio Olympics.

Argentina's loss Monday night in its Group B finale against Spain, coupled with Croatia's subsequent rout of Lithuania, dropped the Manu Ginobili-led Argentines to fourth place in the group -- but one spot ahead of rival Brazil, which was eliminated.

The USA-Argentina winner will face the Spain-France winner in Friday's semifinals. On the other side of the bracket, Australia meets Lithuania in one quarterfinal and Group B winner Croatia takes on bitter rival Serbia in the other.

With Ginobili, Luis Scola, Andres Nocioni and Carlos Delfino, Argentina stunned a U.S. team that featured a 20-year-old named Carmelo Anthony in the semifinals of the 2004 Olympic tournament in Athens. That loss sparked a complete overhaul of USA Basketball, which led to the 2005 appointment of Duke's Mike Krzyzewski as coach under USAB chairman Jerry Colangelo.

The Americans have since won 21 consecutive games in the Olympics and two successive gold medals under Krzyzewski. But Team USA, with Anthony as its most experienced player, has struggled by its own lofty standards in Rio, winning its previous three games against Australia, Serbia and France by a mere 16 points combined.

Thompson insisted that a late flurry by the French, after the Americans had seized a 100-90 lead, made the final margin look "worse than it was."

As for criticism his team has received for not coming together as quickly as anticipated compared to the cohesion underdog opponents such as Australia and Serbia have shown, Krzyzewski told SportsCenter of his players: "Well, I do think they trust each other. They're just not accustomed to playing with one another. When you're together for one month, it's not as instinctive.

"But don't confuse it with not getting along, pulling for each other, things like that. It's just not as instinctive as it would be for an international team that's played together for years. That's always something that we have to fight in putting a team together for these international competitions. But we're getting there."

Team USA throttled Argentina by 37 points last month when the teams met in a July 18 exhibition in Las Vegas. But the Americans' road to the gold-medal game will force them to see off the most seasoned competition they could have drawn just for the chance to play for the championship in Krzyzewski's farewell tournament.

Spain opposed the United States in each of the past two gold-medal games, losing by scores of 118-107 and 107-100. This incarnation of Spain, however, will be without Memphis Grizzlies center Marc Gasol, who is not playing alongside brother Pau Gasol at these Olympics as he continues his recovery from the foot surgery that limited him to 52 games last season.

"We know that the quarterfinals is the beginning of another tournament," France coach Vincent Collet said. "When you reach this goal, [then] the real tournament starts."

Said Team USA's Thompson: "Everyone we see now is going to be explosive. We're happy to be 5-0 and we control our own destiny. We just have to trust ourselves on both sides of the ball, and if we do that and play hard, I don't think we'll lose."
Related topics:
sportsespnquarterfinalsklay thompsonmens basketballmanu ginobilimens olympic basketballcarmelo anthony2016 rio olympicsteam usaluis scolabasketballargentinaolympic sportssummer games
Copyright © 2020 ESPN Internet Ventures. All rights reserved.
More Videos
From CNN Newsource affiliates
TOP STORIES