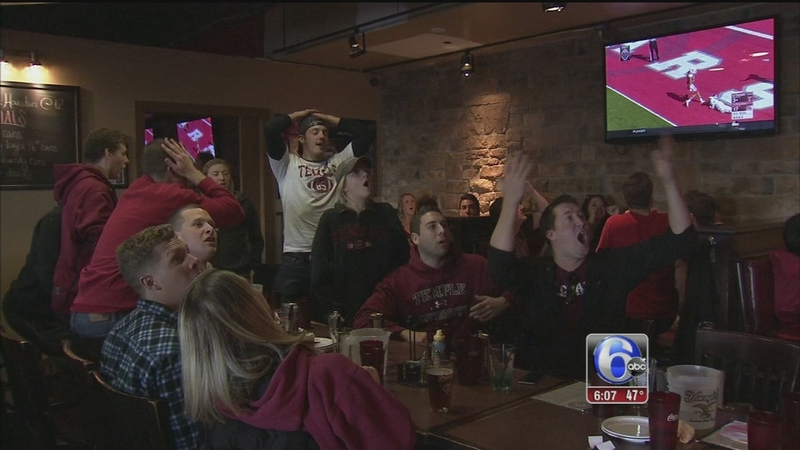 HOUSTON (WPVI) -- Temple students cheered for the Owls from afar as they fought for the American Athletic Conference Championship at the University of Houston.

Every seat was filled at the Draught Horse Pub and Grill Saturday on Cecil B. Moore Avenue where excitement turned to disappointment.

"We made so many mistakes right in a row. There were just two bad snaps right in a row, we missed the fourth down and we just lost the game because of it," said senior Andrew Mentz.

"They definitely fought their hearts out so I'm definitely proud of the team," said Elizabeth Ashley of North Philadelphia.

Even with the loss, Temple fans say it's been a groundbreaking season. Current students say it's just been a fun season to be on campus, and former students say its given them a great reason to come back.

"It started off with beating Penn State for the first time in what - 74 years? And just the momentum of the team and this great season, alumni have just been excited about football," said Tara Miller of Temple Alumni Relations.

Organizers were thrilled with the turnout for a watch party at the Piazza in Northern Liberties.

Hundreds of Temple Alumni watched the game on the outdoor big screen, including the Jimenez family of Northeast Philadelphia with pom poms, signs and even a homemade T.

All we got. #Family pic.twitter.com/RKReRAK2Q8

"This is awesome. It's the middle of December and it's 50-something degrees outside watching the Owls. It feels great," said Nick Jimenez.

Now sights turn to the bowl games, and with the win Houston has secured a spot in one of the New Year's Six. But Temple fans are still holding out hope for a decent bowl.