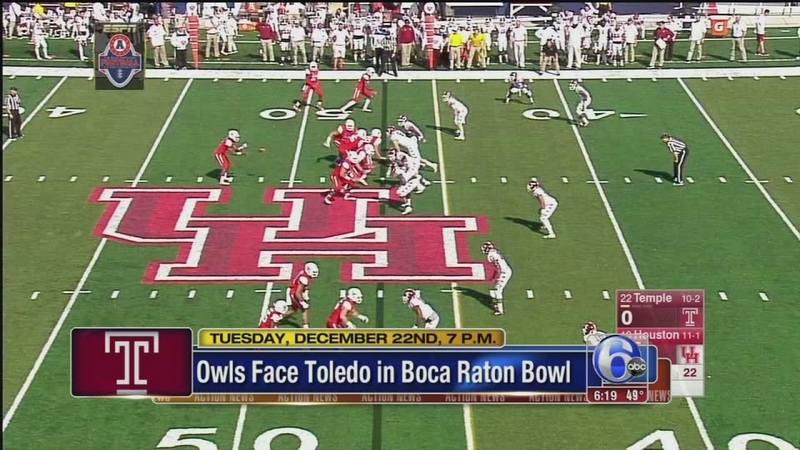 PHILADELPHIA (WPVI) -- Though the Temple Owls did not walk away as AAC Champions, they are going to a bowl game - the Marmot Boca Raton Bowl to be precise.

Temple will take on the Toledo Rockets at 7 p.m. Dec. 22 in Boca Raton, Florida.

#TUFB is going bowling! The Owls face Toledo on Dec. 22 in the @MarmotBocaBowl. Details: https://t.co/B2KHVkj8JY pic.twitter.com/qOXGykpks2

The #24 Temple Owls (10-3) will meet the Toledo Rockets (9-2) in the Marmot Boca Raton Bowl on Tuesday, December 22 pic.twitter.com/iwtTmZIrQ4

Temple (10-3) had a chance to get within a touchdown early in the fourth quarter, but Jeremy Winchester knocked down a pass in the end zone and the Owls settled for a field goal that made it 24-13.

They had two more chances to cut the deficit after that, but were stopped on fourth down both times.

"This isn't deflating," Temple coach Matt Rhule said. "This is one of the most positive days in Temple football history. I wish we would have won, but we got down, and our kids fought back. Disappointed, yes, but we are going to play in a bowl game."