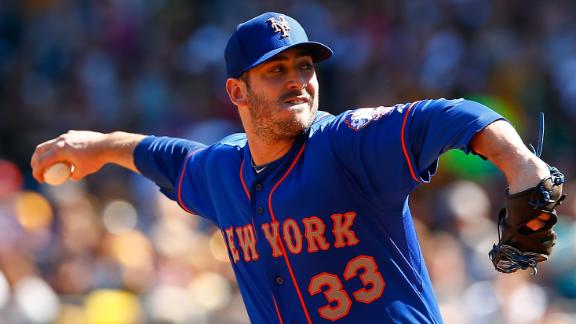 "I have not talked to Matt yet, but it looks like he might be going through some of that dead arm stuff that sometimes happens. This might help him to have an extra day to get him back on track," Collins, referring to the team's day off on Thursday, told reporters. "He's going to pitch Friday with five days' rest, be ready to go."

Harvey (5-2) lasted only four innings in an 8-2 loss to the Pirates on Saturday in the shortest outing of his career. He gave up a career-worst seven runs on six hits and also threw two wild pitches, matching the number he had all of the 2013 season. His ERA shot up to 2.91.

"Everything was kind of all over the place," Harvey said after the game. "I wasn't locating, obviously. My arm feels fine, my body feels fine. It was one of those days where if I tried to spin it, it was over the middle. If I tried to throw a fastball in, it was away and vice versa. It's just a pretty terrible outing."