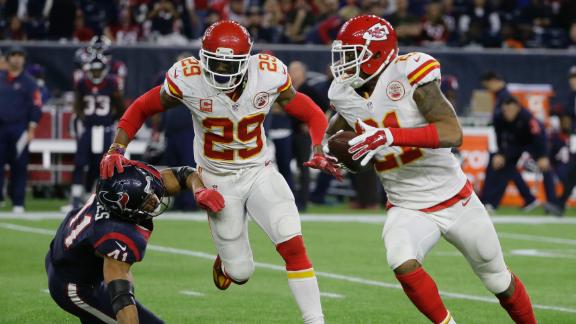 HOUSTON -- The Houston Texans ended their season on Saturday night with the same problem that has haunted the franchise for most of its 12 years: an unsettled plan at quarterback.

Brian Hoyer threw four interceptions and lost a fumble in Houston's 30-0 wild-card loss toKansas City. Three of the picks and the fumble occurred on the Texans' first six possessions, yet coach Bill O'Brien said after the game that he didn't consider a quarterback change.

"Brian wanted to finish the thing out," said backup quarterback Brandon Weeden, who began warming up toward the end of the third quarter. "I don't blame him. I've been in that situation before. It's the kind of person he is. He's a competitor. Felt like he wanted to finish the fight with his guys."

Hoyer finished 15-of-34 passing for 136 yards, no touchdowns and a QBR of 1.7. According to the Elias Sports Bureau, he is the first player to attempt at least 30 passes and complete fewer than half of them without a touchdown in a home playoff game.

When Weeden began to warm up, the Chiefs were ahead 20-0 and driving toward the end zone as the third quarter ended. After Kansas City scored four seconds into the fourth quarter to go up 27-0, Hoyer stuck as the starter.

"I named him the starter," O'Brien said. "With the game plan and the amount of reps that Brandon had gotten during the week, which was basically nil, I felt like the right thing to do was stick with Hoyer."

Said Hoyer: "It's been a long year. I fought my way back to play here. I didn't want to be coming out of that game. Those guys that were playing out there deserve for me to finish that game. ... For me to cop out, it would just show a lack of being a man and a lack of leadership."

According to ESPN Stats & Information, Hoyer's 1.7 Total QBR was the third-lowest in a playoff game in the past 10 seasons and lowest since the Panthers' Jake Delhomme turned the ball over six times against the Cardinals in the 2008 divisional round.

"To throw four [interceptions] in one game, that's not the way I play," Hoyer said. "We talked about it all week to try and protect the ball, and obviously I didn't do that."

Hoyer is under contract for next season, but his roster status seems anything but settled.

"That's nine months away," Hoyer said when asked if he expects to remain the starter. "I am going to prepare every day like I am, that's for sure. I owe it to those guys in the locker room and these coaches to do everything I can to be a better player for next time I step on the field."

Hoyer was the team's starter in Week 1 against the Chiefs. That was his worst game of the season, prior to Saturday's loss. Against the Chiefs in Week 1, he threw an interception and lost a fumble in the first half of the game. Midway through the fourth quarter, O'Brien replaced Hoyer with Ryan Mallett. Mallett has since been released, and O'Brien told his team in November he never should have benched Hoyer to begin with.

Entering Saturday's game, Hoyer had 19 touchdowns and seven interceptions. He had passer ratings better than 100 in five of the 11 games in which he played. Hoyer regained his starting job in Week 6, but missed three games after that due to two separate concussions which he suffered in the span of less than one month. In his absence, the Texans went 3-0, with T.J. Yates and Weeden playing quarterback against theJets, Titans and Colts.

Chiefs dominate Texans, earn first playoff win since 1994
Kansas City's defense forces five turnovers from Houston QB Brian Hoyer in a 30-0 win to advance to the divisional round of the playoffs.