The Eagles are the rarest of things: Top-seeded underdogs 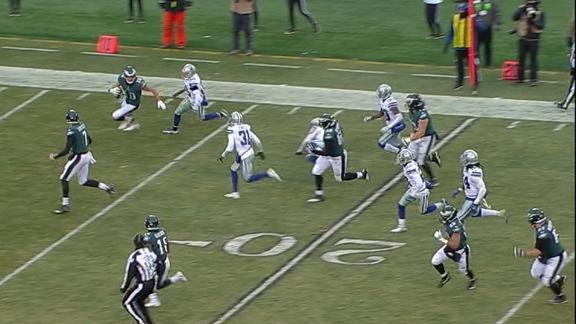 PHILADELPHIA -- The Philadelphia Eagles and Dallas Cowboys played a frigid football game Sunday that was an assault on the senses, an unwatchable exercise in avoiding a torn ligament here or a broken bone there. Dallas won by a 6-0 count, the Philadelphia punter took the field with his sweatpants on and the visuals all day were as gray as the sky.

Nick Foles looked terrible (again) in his brief appearance, and scores of Philly fans went home thinking their chances of winning even one playoff game don't look any better thanCarson Wentz's knee. But the Eagles have something strong working in their favor. They've become underdogs. Big underdogs. They're the top seed in the NFC with a 13-3 record, and they're armed with home-field advantage through their side of the Super Bowl bracket. Yet everyone who has had a peek at Foles is figuring Philadelphia is booked for a certain one and done.

The Eagles can make that work for them. It's not often that a team with a heavyweight's résumé, including a 7-1 record at home, gets dismissed as a lightweight. "Nobody believes in us" is a tired, lazy-minded battle cry. But let's face it: Nobody believes in the Eagles anymore. People stopped believing the moment No. 11 exited (with a hobble) stage left.

Here's the consolation prize: In a city that erected a statue to the fictional Rocky Balboa, and on a team that plays the "Rocky" theme song before the opening kickoff, the Eagles should be comfortable as long shots. They've never won a Super Bowl, and they haven't won an NFL championship since 1960. If they're ever going to win the big one, chances are they'll need to do it the hard way -- with a physical, all-weather defense that requires only a competent offense to advance.

America loves few things more than an underdog, so it should go ahead and embrace the Eagles now. They didn't just lose a franchise quarterback a few weeks ago, they lost their left tackle (Jason Peters), middle linebacker (Jordan Hicks), all-purpose back (Darren Sproles) and special-teams ace (Chris Maragos) in the fall. How many teams win a Super Bowl after losing a potential league-MVP quarterback and a nine-time Pro Bowler at left tackle?

None. The Eagles are extremely vulnerable now, which makes them more likable. So does their postseason history, or lack thereof.

Philadelphia last ruled pro football long before the Super Bowl was a glimmer in anyone's eye. But hey, that 1960 title was a doozy. On the day after Christmas at Franklin Field, the Eagles became the first and last team to beat Vince Lombardi's Green Bay Packers in a postseason game.

Lombardi would go 9-0 after that day, winning five championships -- including the first two Super Bowl titles -- and building a legacy worthy of naming the ultimate trophy in his honor. His enduring greatness elevates those Eagles to this day. On the phone over the weekend, Maxie Baughan, a Pro Bowl rookie linebacker on that 1960 team, recalled the exhilaration he felt when his teammate, the great Chuck Bednarik, stopped Green Bay's Jim Taylor at the Philadelphia 8-yard line on the final play to preserve the Eagles' 17-13 victory.

"The buzzer went off," Baughan said, "and just to hear that and feel that as a rookie, I was so excited I just ran to the locker room. It was something else."

Baughan said that he was in the habit of attending a handful of Eagles games every season, but that health problems this year forced him to watch his favorite NFL team on TV. He made nine trips to the Pro Bowl -- five with the Eagles then four with the Rams -- and stands among pro football's most accomplished players not enshrined in the Hall of Fame. He also happens to be the first defensive coordinator to teach a young Bill Belichick how to break down film and opposing offenses when they worked under Ted Marchibroda for the 1975 Baltimore Colts.

Baughan loves talking about his rookie season with the Eagles, about arriving in a city and in a pro sports league he knew absolutely nothing about. Out of Georgia Tech, Baughan was the son of an Alabama steelworker who was in awe of the Eagles' 34-year-old quarterback, Norm Van Brocklin. "I was scared to death of him," Baughan said. "I called him, 'Sir.'"

Baughan wasn't afraid of much. Asked to identify his most cherished memory from 1960, other than beating Lombardi's Packers for the title, he summoned the memory of a preseason brawl he helped inflame at San Francisco's Kezar Stadium. He said 49ers star Hugh McElhenny kicked the Eagles' Eddie Khayat in the head. "I was near the bench, as a rookie, just standing there," Baughan said. "Hugh kicked Khayat, and I took off after him. I chased him 30 yards, and we went at it for a while. It was fun." Reports at the time said this fun involved about 80 scuffling players.

"We had a few fights along the way," Baughan said.

They were representing Philadelphia after all, a fighter's kind of town. Fifty-seven years later, Baughan said he's enjoyed watching this year's Eagles "play out of their gourds." He was explaining how he appreciated Philly's toughness and resilience, and how he liked this team's chances to end the city's biblical championship drought, when his wife, Diane, spoke up in the background.

"Don't forget about the quarterback," she said.

On his final throw of 2017, Wentz threw a touchdown pass with a torn ACL. He came in like a superhero and went out like a superhero. Maybe that injury against the Rams cost the Eagles a ring. But even if it did, 2017 cannot be considered a lost cause in any context.

The NFL scene of the year unfolded on a summer night in the Linc, where Malcolm Jenkins and Chris Long reintroduced Philadelphia as a city capable of profound brotherly love. Jenkins raised his right fist in the air during a preseason playing of the national anthem while Long wrapped his tattooed left arm around his teammate's shoulder pads. Whatever story the Eagles told from there, they would tell it as one.

"Everybody in the building is worried about winning the Super Bowl,"Jenkins said.

It would be a hell of a story if they can pull it off, and one worthy of some coast-to-coast love.

Final play epitomizes Cowboys-Eagles game
Philadelphia tries to hook-and-lateral its way to a touchdown and things don't go as planned.