The next 11 players who could change the future of basketball 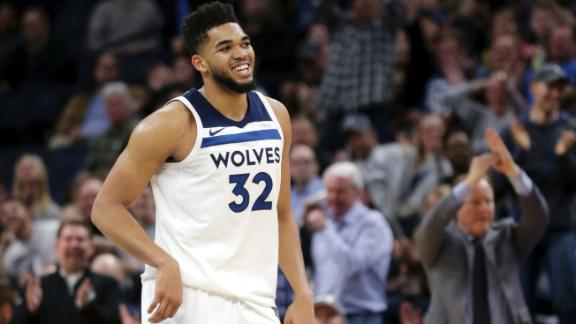 Who might join ESPN's rankings of the greatest game-changers in NBA history the next time we update the list?

Our rankings were based on who has done the most to change the way we play the game, how we talk about the game and the culture of basketball. That's not always easy to predict, but let's take a look at some young players not currently in the top 100 who have a chance to emerge as game-changers over the course of their careers.

In many ways, it's LaVar Ball who's the real game-changer off the court. However, Lonzo's game is revolutionary in its own way.

Not since Jason Kidd have we seen a point guard so willing to throw the ball ahead in transition, empowering his teammates to make plays before the defense is set. Ball is also the rare modern point guard whose game isn't built primarily around operating out of the pick-and-roll. His difficulties shooting off the dribble or beating opponents to the hoop mean Ball must create opportunities for himself and teammates in different ways.

In a league increasingly dominated offensively by ball handlers and 3-point shooters, Davis stands as an exception.

Per Basketball-Reference.com, his 28.3 points per game this season are the best by a player 6 feet 10 or taller since Shaquille O'Neal averaged 28.7 per game in 2000-01. And since teammate DeMarcus Cousins went down with a ruptured Achilles, Davis has averaged an incredible 31.2 PPG. No player 6 feet 10 or taller has topped 30 in a full season since Moses Malone in 1981-82.

In the midst of his best NBA season, DeRozan advanced the discussion about mental health in the NBA. DeRozan's tweet quoting the Kevin Gates song "Tomorrow" opened the door for him to discuss his occasional battles with depression with Toronto Star beat reporter Doug Smith.

In turn, Kevin Love of the Cleveland Cavaliers credited DeRozan's comments for encouraging him to discuss panic attacks he'd suffered this season in a first-person article for The Players' Tribune. As the conversation about mental health in the NBA becomes more open and honest, DeRozan deserves credit for his game-changing candor.

While game-changers Sarunas Marciulionis and Drazen Petrovic proved guards from Europe could successfully play in the NBA, with the exception of Tony Parker, the biggest stars Europe has produced remain primarily post players.

As perhaps the greatest European prospect in the modern era, the precocious Doncic has the chance to change that history. At age 19, Doncic is the best player in the EuroLeague, the second-best basketball competition in the world. That makes him a possible No. 1 overall pick in this year's NBA draft. No player has gone No. 1 without playing college basketball since Andrea Bargnani in 2006.

The self-proclaimed "Process" has proved a trustworthy contributor after getting back on the court following two seasons lost to a navicular fracture. At 7 feet and a listed 250 pounds, Embiid is a powerful force around the basket who also has attempted more than three 3-pointers per game the past two seasons and occasionally will blow by poor closeouts to drive from the perimeter and finish above the rim.

Still, Embiid's greater game-changing potential might be off the court. Before he played an NBA game, Embiid already was a star thanks to his comedic Twitter presence. He has somehow turned Instagram's location feature into a tool to troll opponents. Future stars should take lessons from how Embiid has made social media work for him.

Past prospects who skipped NCAA basketball to play overseas (Brandon Jennings, Jeremy Tyler,Emmanuel Mudiay) have failed to yield an anticipated copycat effect. It's possible the year Ferguson spent playing in the Australian NBL could have more lasting impact. With the NCAA eligibility of top players increasingly fraught in the wake of the FBI's investigation of amateur basketball, the NBL seeks to build on Ferguson's stint Down Under -- which saw him drafted 21st overall by the Thunder last June -- to bring other top prospects to Australia.

ESPN's Jonathan Givony reported earlier this month that the NBL plans to offer such players $100,000 Australian salaries (about $78,000 U.S.) funded by the league as part of its "Next Stars" program. It's possible the NBA lowering its age limit could undercut the NBL's efforts, but for now it looms as a more lucrative alternative to the NCAA -- thanks in part to Ferguson's example.

Jokic is changing the game with his combination of court vision, creativity and willingness to attempt difficult passes others wouldn't throw. His 6.0 assists per game this season are the most by a full-time center since Wilt Chamberlain averaged 8.6 per game in 1967-68.

The nickname "Unicorn" no longer feels appropriate for Porzingis, who has proved a harbinger of the trend toward stretch 5s rather than one of a kind.

Consider that when Porzingis made his NBA debut, just eight players in league history had posted seasons with at least 100 3-pointers and 100 blocks. Six players, including the 7-foot-3 Porzingis, have done it in the past three seasons alone.

There have been big point guards before, most notably Magic Johnson (No. 3 on the list of game-changers), and point forwards like LeBron James (No. 2). Before Simmons, however, there had never been a full-time point guard who stood 6 feet 10.

As a rookie, Simmons has rewarded 76ers coach Brett Brown's decision to use him in that role, racking up 10 triple-doubles and averaging an unprecedented 8.0 rebounds and 8.0 assists per game as perhaps the most versatile rookie we've ever seen.

While Porzingis got tabbed the Unicorn, Towns' skill set might be harder to find because of how well he scores both inside and out.

So far this season, Towns leads all NBA players who have finished at least 125 post-up plays with a shot, trip to the free throw line or a turnover by averaging 1.04 points per play,according to Synergy Sports tracking on NBA Advanced Stats. Overplay Towns in the post and he'll simply step out to the perimeter, where he's shooting 42.8 percent on 3-pointers this season -- the best accuracy ever for a 7-footer with at least 150 attempts, per Basketball-Reference.com.

As an undersized point guard with a penchant for shooting long 3s off the dribble, Young is a spiritual successor of two-time MVP Stephen Curry (No. 10 on the list of game-changers). Yet Young is traversing new ground for a player of his ilk as a dominant scorer from his first day on campus.

Young became the first player to lead Division I in both points and assists per game since the latter became an official NCAA statistic in 1983-84. If he can translate that success to the NBA, Young will prove Curry isn't one of a kind.