The Process of catching a Home Run Derby ball 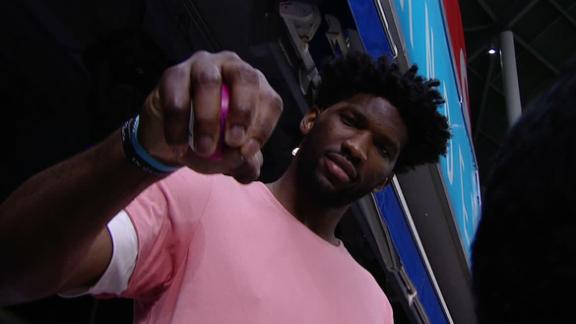 Joel Embiid continues to pop up at major sporting events during the NBA offseason. On Monday night, Embiid was seen at the 2017 Home Run Derby in Miami.

As MLB sluggers such as Aaron Judge -- the eventual winner of the derby -- Miguel Sanoand Gary Sanchez crushed home run after home run into the stands of Marlins Park, Embiid was determined to get his hands on at least one ball. Although his bare-handed catch attempt was noble, Embiid couldn't quite figure out the process of how to get on the end of a homer.

Eventually, he resorted to collecting balls after they dropped in the stands.

Embiid might not have had a great catch attempt, but heading home with a few souvenirs still makes for a pretty successful night.