The serendipitous Olympian: Why American Mike Testwuide will skate for South Korea 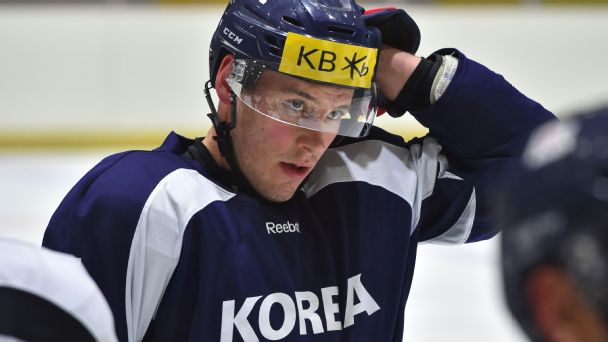 Mike Testwuide was in a rut. It was 2013, and Testwuide, 26, was kicking around in the minor leagues. He had signed an entry-level deal with the Philadelphia Flyersin 2010 as an undrafted free agent out of Colorado College. Then-Flyers GM Paul Holmgren complimented Testwuide several times over the ensuing summer, telling the media that he thought the winger could make the team out of camp. Testwuide was among the Flyers' last cuts. So he reported to Glen Falls, N.Y., to play for the American Hockey League's Adirondack Phantoms, and stayed there for three seasons. Each offseason, his NHL dream drifted further out of reach. Then he was traded to the Calgary Flamesin February 2013.

Coaches at each of his various stops decided that Testwuide's 6-foot-3, 215-pound frame was probably just that: an AHL body.

"I wasn't really enjoying the American League life," Testwuide says. "I fell into a role that I didn't really enjoy. They wanted me to fight. I wasn't having as much fun with hockey anymore."

He considered a change. His agent secured contract offers from several European leagues -- in Austria, Germany and Sweden. Testwuide saw himself going to Germany, and then a friend suggested he check out another opportunity: the Asia Hockey League.

"It was so out of the box," Testwuide says. "At first you think, 'There's no way there's even hockey there.' But I looked into it. I contacted a few former guys who played there, and they all had great things to say. They said they treated players amazing there."

In 2013-14, without much to lose, he signed with Anyang Halla, a team based about 12 miles south of Seoul, South Korea. He was driven to his apartment directly from the airport but couldn't sleep because of jet lag. So he walked around the city and took it all in -- the skyscrapers, the frantic bustling on the streets, the colorful billboards, all in a language he did not recognize. "What did I sign up for?" he wondered.

Five years later, Testwuide's hockey career has been revived. He has rediscovered his passion for the game. He's playing some of the best hockey of his life. In fact, Testwuide is getting ready to play on the world's biggest stage, as an Olympian -- and with a South Korean flag stitched to his jersey.

The tale of how a kid from Colorado became a South Korean citizen -- with no connections or roots to the country -- is quite remarkable. That Testwuide is preparing to be an Olympian is unfathomable, even to him.

"Putting the Team Korea jersey on for the first time, it was like, 'What am I doing? Am I betraying my country? Am I a traitor?'" Testwuide says. "Then you look at it like a cool opportunity. Something you can't really script. The Olympics were never really on my radar. I was never in that league. NHL All-Stars, that's who usually goes to the Olympics. I never made the NHL, so that was out of my realm. But for this to actually come to fruition ..."

The career turn was serendipitous.

Testwuide didn't have much trouble assimilating in Seoul. Sure, most of the expats he met were either in the military or English teachers, but the team provided him with a translator, who was really much more of a fixer. Phone bills, banking, buying groceries? Testwuide had someone to help with that.

The style of play took a little getting used to. Ever since South Korea was awarded the 2018 Olympics -- meaning an automatic berth for both its men's and women's teams -- the country has made a commitment to hockey, including a four-year, $20-million investment plan. The enthusiasm has trickled down to the youth level; in 2011 only 897 boys and girls in South Korea were registered to play hockey. Now there are more than 2,000.

But back in 2013, hockey was still finding footing in the country. And that showed in its professional league.

"I call the Asia League 'controlled chaos,'" Testwuide says. "When you have some of the fastest skaters on Earth who haven't had a solid coaching foundation, that is the result."

Even still, Testwuide scored 54 points during his first season (42 games) with Anyang Hallaand then 61 points the next. That's when he was approached by Jim Paek, who had been hired to run the men's national team and, according to Testwuide, "was given a pretty long leash of how to make this Olympic dream happen."

Paek was born in Seoul but grew up in Canada, and became the first Korean player in the NHL before winning two Stanley Cups with thePittsburgh Penguinsin the 1990s. He told Testwuide he liked the way he played, and asked: Would Testwuide consider becoming a South Korean citizen so he could compete for his Olympic team?

Testwuide's response: "How could I say no?"

Paek's goal was to include six to seven "imports" on his team -- mostly Canadians -- who could bolster the roster with North American experience. It would help, too, with Testwuide's standing in the Asia League, as teams are capped at three exports.

The naturalization process was expedited because of his stature as an athlete, Testwuide explains. First, he had to be approved by the Korean Olympic Committee. A hearing was held, during which Testwuide detailed his hockey resume and proved why he deserved a position on the team. After he was awarded a recommendation, he was sent to the government for citizenship. There was a written test -- centered on South Korean history -- then an oral test in a boardroom.

"I really had to study," Testwuide said. "Honestly, if I was given the same test about American history, I'd probably fail."

It culminated with Testwuide performing the national anthem.

"That was probably most intimidating part," he says.

A decision was granted on the spot.

In 2015, Testwuide played for South Korea in the IIHF World Championships. South Korea went 4-1-0 to win the Division I B tournament and get promoted to Division I A in 2016.

Paek coaches in English, which most of Testwuide's teammates speak pretty well, so language barriers were never really an issue on the ice.

"Plus, hockey has its own kind of language," Testwuide says.

About a month before the opening ceremonies in Pyeongchang, the reality had finally settled in. Testwuide went home to Colorado last week for one last refresh before the tournament. His entire family, and about 10 friends from Colorado, will go to Pyeongchang. And still, he gets the same questions any time someone hears his story. Why are you doing this?

"My answer?" he says. "I played with these guys for five years. We've become like a brotherhood, a big family. We've battled together. It's not about being American or Korean or Canadian. When we're on the ice, we're all Korean."
Report a correction or typo
Related topics:
sportsespnnhlsouth koreaolympic sportsmike testwuideolympicsolympic hockeyphiladelphia flyersice hockey
Copyright © 2020 ESPN Internet Ventures. All rights reserved.
More Videos
From CNN Newsource affiliates
TOP STORIES