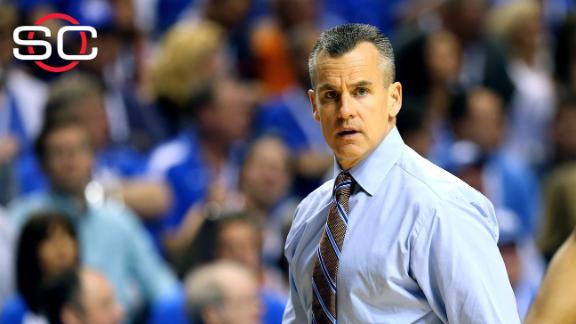 Sources told ESPN's Ramona Shelburne on Thursday that Donovan agreed to a five-year deal -- with a team option on the fifth year -- to replace Scott Brooks, who was fired as coach of the Thunder after seven seasons on April 22.

Donovan will be introduced at a Friday news conference scheduled for 2:30 p.m. ET, the Thunder said.

Donovan spent the past 19 years as coach of the Gators, with whom he won two national championships and appeared in four Final Fours.

"I am honored and humbled to be named the head coach of the Oklahoma City Thunder. I knew that it would take a unique opportunity to leave the University of Florida and that is clearly how I look at this situation," Donovan said in a statement. "The Thunder represents so many of the values that I embrace as a head coach; the commitment to the team above oneself, the dedicated pursuit of excellence, the commitment to organizational culture, the identity they have established and the fact that the Thunder and the community are so intricately woven into the fabric of one another."

Thunder general manager Sam Presti, who had made regular trips to Gainesville to scout prospects and observed Donovan, as well, did not interview any other candidates for the position.Presti and Donovan have a previous strong relationship and have similar ideas about team culture and advanced metrics. That could provide added organizational synergy, something Presti highly values.

"While we created a comprehensive analysis regarding the qualities we were looking for, it became quite evident that Billy was the ideal fit for the Thunder as we look to transition our team into the future," Presti said in a statement. "... His emotional intelligence, commitment to the concept of team, and relentless approach to incremental improvement have allowed him to bring his players together and establish lasting relationships through competitive success. Billy's core values and alignment with our culture and community, as well as his proven tactical abilities, make him an ideal addition to the Thunder organization."

The Thunder have hired two of Donovan's staffers in the past year, bringing in Mark Daigneault to coach the team's D-League affiliate (the Oklahoma City Blue), and Oliver Winterbone as an information analyst.

Donovan takes over a Thunder team with championship aspirations, particularly in what will be a high-pressure season with Kevin Durantentering the final year of his contract.

Durant said he was excited when hearing the news of Donovan's hire.

"When you don't have a coach, it's a lot of uncertainty in the building," Durant said in a phone interview. "But coming into the practice facility today, I felt like it was the next step for us. It was an exciting feeling for everybody that was there at the gym today to learn that we got Billy as our coach."

According to ESPN.com's Marc Stein, Durant had sent "optimistic signals" about playing for Donovan, having done his own research on the coach.

"We warmly welcome Billy and his family to Oklahoma City," team chairman Clayton Bennett said. "He is the perfect fit for our organization and for our community and we look forward to a long and successful relationship."

The Thunder job is Donovan's second in the NBA, but he has never coached a game in the league. He agreed to become the Orlando Magic's coach in 2007 after back-to-back titles with the Gators, only to reverse course days later and ask out of his contract.

The Thunder kept in regular contact with Durant, Russell Westbrook and Serge Ibaka throughout the process, but never specifically asked for approval on Donovan or any other specific coach. Sources close to the situation told ESPN's Shelburne the team didn't want to put them in that position, but that they had ample opportunity to speak up.

Donovan is coming off his first losing season since 1998, as the Gators went 16-17 in 2014-15 and missed postseason play for the first time since 1997. Along with the two national titles, he led Florida to four Final Fours, seven Elite Eights and 14 NCAA tournament berths.

He had signed a one-year contract extension with the Gators in December that would have paid him an average salary of $4 million through 2020.

Combined with his two seasons at Marshall, Donovan's 502 wins over 21 seasons are tied for fifth all time in Division I history with Syracuse's Jim Boeheim.

"While we are certainly extremely sad to see Billy go, the primary feeling I have is one of gratitude for what he has done here," Florida athletic director Jeremy Foley said. "Billy and Florida basketball have been synonymous for a long time now, and our program would not have reached the heights it has without him.

"The legacy he leaves here is one of personal and professional excellence. ... There is no better person than Billy Donovan. He will truly be missed."

Foley said Florida would not put a timeline on hiring a replacement for Donovan and that a search committee will help find a successor.

Donovan, who will turn 50 next month, has flirted with making the transition to the NBA for a while, and he was courted last offseason by both the Timberwolves and Cavaliers for their then-vacant positions.

Donovan, a native of the New York City suburb Rockville Centre, on Long Island, played part of the 1987-88 season with theKnicksbefore being waived. He played four years at Providence College.

Marc Stein of ESPN.com and The Associated Press contributed to this report.