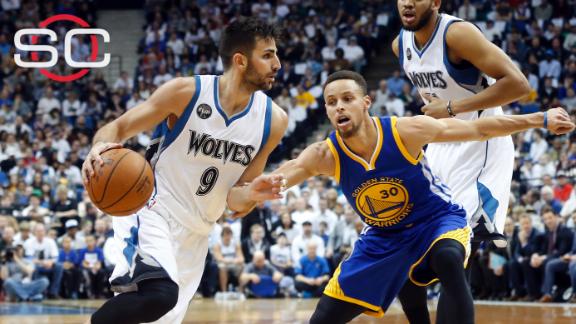 Minnesota Timberwolves owner Glen Taylor said during a recent interview that he doesn't think the team will trade Ricky Rubio.

Rubio has been the topic of widespread trade speculation ever since Minnesota drafted point guard Kris Dunn with the No. 5 overall pick last month. The Spanish point guard also publicly acknowledged before the draft that the 2016-17 season could be his last with the Timberwolves.

But when asked about a potential trade involving Rubio, Taylor told the Minneapolis Star Tribune that he doesn't "see that as a likely possibility."

"I just think the coach, everybody, likes Ricky," Taylor told the Star Tribune. "I think we want him to come in and improve on his shooting. But his other things, he plays defense, he gets assists, he helps the others get better. He has some wonderful qualities."

Rubio, 25, has three years remaining on his current contract with Minnesota. But in an interview last month with Spain's Catalunya Radio, he said that he'd "have to start thinking about teams that can get to the playoffs and win in the Finals" if the rebuilding Timberwolves miss the postseason again next season.

Minnesota has assembled a young core of players that includes Karl-Anthony Towns, Andrew Wiggins, Zach LaVine and Dunn, a two-time Big East Player of the Year.

The Timberwolves hired Tom Thibodeau as their head coach in April, and Taylor told the Tribune that the new coaching staff will attempt to help Rubio improve his shooting.

"I think the coach wants to bring an assistant coach to help Ricky on his shooting and I think that's where we're going to start out and go and we'll see how good Kris Dunn is," Taylor said.