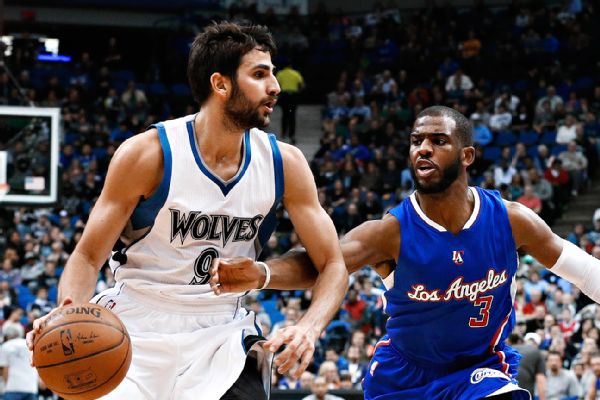 MINNEAPOLIS -- The Minnesota Timberwolves say Ricky Rubio will be out indefinitely with a sprained right elbow.

The team announced late Monday night that an MRI exam revealed a sprain and no break. That means he is not expected to miss extended time with the injury, but will not be ready for the team's home opener Tuesday night.

Rubio was injured in the fourth quarter of Saturday night's loss to the Sacramento Kings. Rubio is an integral part of a young Wolves team that is trying to end a 12-year playoff drought. His veteran leadership, passing and defense are needed on a team that has started the season 0-2.

With Rubio sidelined, rookie backup Kris Dunn is in line to start the home opener on Tuesday night against Memphis.

"Next man up,'' Timberwolves coach Tom Thibodeau said Monday when asked whether Dunn was ready to start this early in his tenure. "You don't get here by accident. You're here, you're a great player -- get in there and get the job done.''

Dunn was the fifth overall pick out of Providence in June, and his defensive acumen has impressed Thibodeau. The demanding coach has said that the 22-year-old Dunn is "NBA-ready'' from a defensive perspective right now, and Thibodeau lauded his young point guard's effort on that end through the first two games.

The bigger challenge for all rookie point guards is organizing and running an offense. With Karl-Anthony Towns, Zach LaVine and Andrew Wiggins at Dunn's disposal, it will be up to him to keep the mouths fed and the ball moving when he steps in for Rubio.

"Defensively, he's done a lot of good things, and I think the more experience he gets the better he's going to play,'' Thibodeau said. "He's learning. He's getting better each day. There will be some ups and downs, but his intensity will cover up for things.''

Dunn said getting those first two games on the road under his belt has helped him adjust to the speed of the NBA game, particularly in the fourth quarter. He said he will be ready to start.